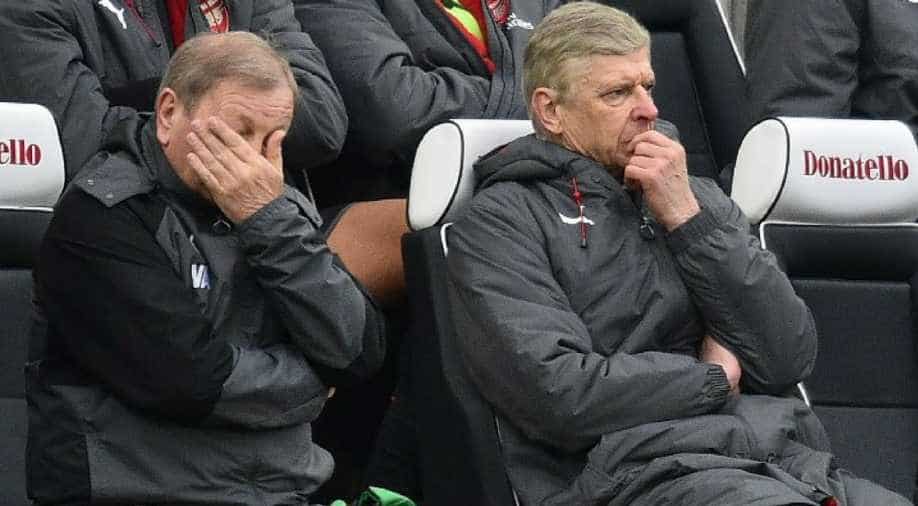 Arsene Wenger said Arsenal must recover quickly if they are to avoid suffering a fifth successive defeat when they visit AC Milan in the Europa League this week.

The under-fire Gunners manager accepted winning the competition marks his side's best hope of returning to the Champions League next season after a 2-1 defeat at Brighton left Arsenal 13 points adrift of the Premier League's top four.

But Wenger warned the effects of the London club`s recent schedule that included back-to-back 3-0 losses to Manchester City in the League Cup final and the league, had taken their toll on his players.

Wenger gave fatigue as the reason he opted to leave Aaron Ramsey, Hector Bellerin and Danny Welbeck out of his starting line-up at south coast club Brighton's Amex Stadium and the veteran manager is hoping his decision means he can call on fresh legs at the San Siro.

"It is important to recover mentally and physically, we are still jaded today, we gave a lot on Thursday night (against Manchester City) and you can see that today," he said after Sunday`s latest setback.

"We have to continue, first to recover now. We play Sunday, Thursday, Sunday, Sunday... it's nearly physically impossible to play this number of games.

"The veteran French boss, who took charge at Arsenal in 1996, added: "I left Ramsey out completely of the squad, left him at home, after everything he gave physically. We have to be realistic, we need two teams to collapse to qualify for the Champions League, and I don`t see that happening.

"Two teams to drop so many points is very difficult to imagine. But we have to give our best as long as we can, and the Europa League becomes important."

Chris Hughton is only the 3rd manager to beat Arsene Wenger in the #PL with three different clubs (after Mark Hughes & Sam Allardyce)#BHAARS pic.twitter.com/t5y8caNm4j

Wenger admitted his side's confidence is low after a woeful run that has brought eight defeats since the turn of the year and he said he did not wish to add to that problem by criticising the display against Brighton.

"It's difficult for me to get into any negative assessment," he explained. "The team needs more support at the moment. Tough objective judgement as well."

Wenger, in a somewhat bizarre analogy more befitting the occasional ramblings of compatriot Eric Cantona, the former Manchester United star, added: "When you struggle for confidence, it's difficult as well when you have just the trousers on... It's easy to take the trousers off as well, but when you are naked completely you have to try and find a shirt and get dressed properly again."

Defeat intensified the pressure on Wenger but he insisted he had more immediate concerns.

"At the moment, my future is not my main worry. My worry is to get Arsenal winning football games. Then we'll see where we go from there. I`ll try and give my best as long as I am here."

Brighton is now seven points clear of the bottom three and manager Hughton said: "It's relieved a bit of the pressure of having to get a result. It's a nice position to be in.

"Hopefully it will create some confidence. This group are working that hard, giving themselves every chance."

Hughton added: "But we`re all professionals around here and, come tomorrow, our thoughts have to be in the next game -- can we get more points to make it even more comforting? "As soon as you take your foot off the pedal, there are too many good teams around who can knock you down again."