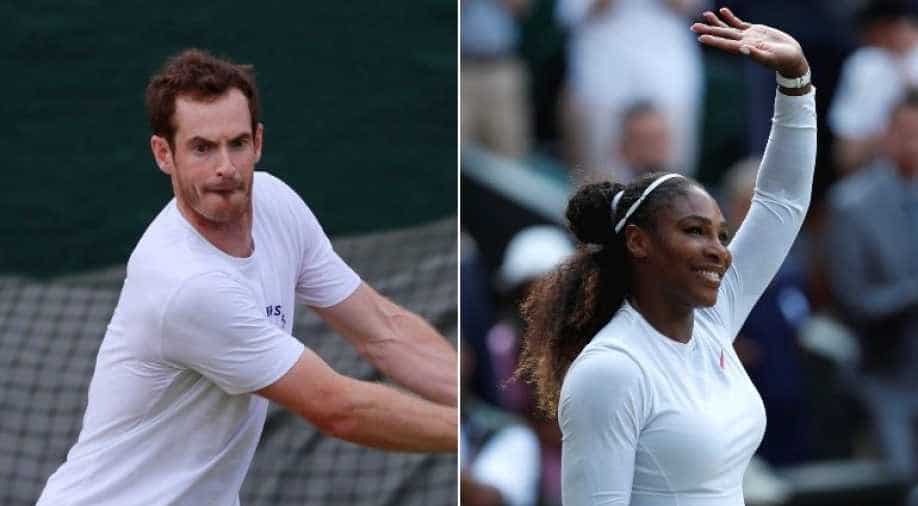 Twice men's singles champion Murray, back playing doubles as he continues his recovery from career-saving hip surgery in February, was earlier turned down for the mixed doubles by new world number one Ash Barty

Andy Murray wanted it, the British fans were desperate for it and the media were working themselves into a frenzy about it and on Tuesday it was confirmed that Serena Williams had said yes.

Speculation has bubbled about a Murray/Williams dream team for the Wimbledon mixed doubles since 23-time Grand Slam singles champion Williams hinted at the weekend about her availability.

After the American struggled past Italian Giulia Gatto-Monticone in the first round of the singles on Tuesday she left the British media in suspense.

"If you guys really want it... all right, done," she teased after initially saying she was still trying to figure out the "singles part" and would "have to see".

But shortly afterwards, Murray's management team confirmed that they would be playing together.

It is a coup for Murray, and the tournament, with crowds set to flock to the All England Club in even greater numbers to try and catch a glimpse of the scratch pairing in action.

Twice men's singles champion Murray, back playing doubles as he continues his recovery from career-saving hip surgery in February, had already been turned down for the mixed doubles by new world number one Ash Barty.

But Williams is not a bad consolation.

Asked at the weekend whether he wanted to play with the American great, the Scot said, with a trademark sense of understatement, the 37-year-old mum would be a "solid" partner.

Williams has won 16 Grand Slam doubles titles but has not played mixed doubles at a major since partnering fellow American Bob Bryan at the 2012 French Open.

She did win the 1998 mixed title at Wimbledon with Max Mirnyi, however, and the prospect of repeating that feat with a player she says she admires greatly proved too tempting.

"His work ethic is just honestly off the charts. That's something I've always respected about him," Serena told reporters when asked about the player who in 2013 became the first British man for 77 years to win Wimbledon.

"His fitness, everything. To do what he's done in an era where there's so many other great male tennis players, so much competition, to rise above it, not many people have done it. He's actually one of the few," Serena said.

Murray, married with two children, also broke the trend and became one of the few top male players to hire a female coach when he took on Amelie Mauresmo for two years from 2014-16.

"He really stands out, he really speaks up about women's issues no matter what," said Williams. "You can tell he has a really strong woman in his life."

The only issue will be whether the American's' knees will cope with the extra demands as she bids for an eighth singles crown here and whether Murray's hip holds up to what will now be a packed doubles programme if they progress.

He is also playing with Frenchman Pierre-Hugues Herbert in the men's doubles having returned to action last month at Queen's Club to win the doubles title with Feliciano Lopez.

Murray's brother Jamie won the mixed doubles at Wimbledon twice, in 2007 with former world number ones Jelena Jankovic and with Martina Hingis 10 years later. He picked his partners well. So it seems has his brother.