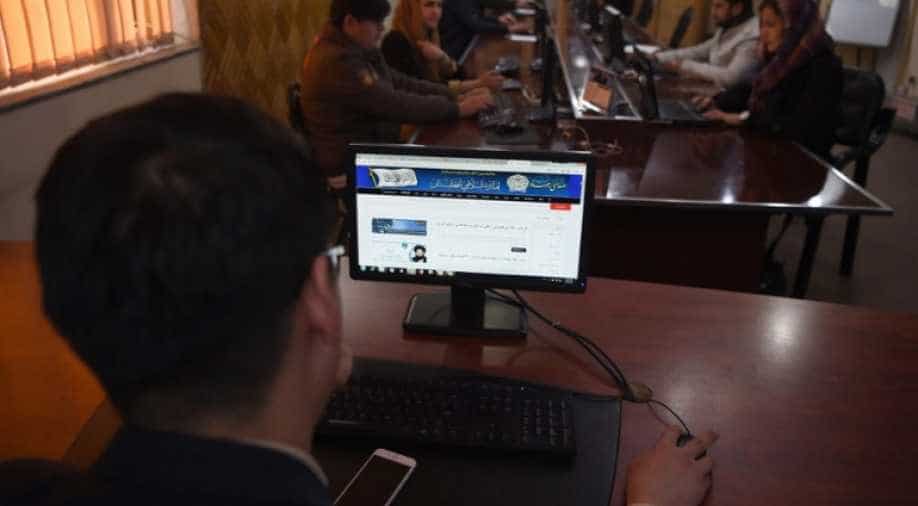 Mujahid says he gets his team of writers to cross-check facts shared by some of the hardline Islamist group's fighters, who double as reporters in the 34 provinces across the country.

Zabihullah Mujahid, the Taliban's chief spokesman and editor-in-chief of the insurgent group`s daily news bulletin, starts every day by collecting reports of overnight fighting with US and Afghan forces.

Mujahid says he gets his team of writers to cross-check facts shared by some of the hardline Islamist group's fighters, who double as reporters in the 34 provinces across the country. The writers prepare press statements in five languages and gather footage and photographs shot on smartphones.

The editor-in-chief then approves final drafts of the reports - highlighting the group's claimed victories in its war aimed at toppling the US-backed Afghan government - before they are published by IT specialists based outside the country.

While some Afghan journalists say its accuracy is patchy, and its opponents accuse it of spreading "fake news", the Taliban's slick media operation has emerged as a key weapon in the information war that often leaves the Western-backed government and its US partners struggling to catch up.

Last month, for example, the Taliban was swift to deny involvement in a suicide attack on the communications ministry in Kabul later blamed on Islamic State, while information from the government was slower to emerge.

Taliban spokesmen say they have also stepped up their outreach as the pace of direct talks between its negotiators and the United States on ending the war in Afghanistan has picked up in recent months. They are often quicker than US officials to give their read-out from the talks - the sixth round of which wrapped up in Qatar on Thursday.

"Whatever developments occur during the Doha talks, we share it with journalists," said Mujahid, adding that the messages were aimed at domestic and international audiences.

Mujahid and his colleague Qari Yousaf Ahmadi, two Taliban spokesmen based in Afghanistan, say they are authorized to interact with journalists, issue statements and tweet. They generally respond to text or voice messages from Reuters correspondents based in Kabul within an hour.

While their location cannot be verified, they use Afghan phone numbers to access WhatsApp. The names they use are pseudonyms assigned to them by the Taliban leadership.

"We are not authorised to reveal our real names, the two pen names are used to retain uniformity," Mujahid, who has more than 42,000 Twitter followers, told Reuters in a telephone interview.

In 2011, the Taliban leadership started posting regularly on Twitter, a surprise move by the radical Islamist movement that once banned most forms of modern entertainment.

"We understand the importance of spreading information about our jihad and our determination to re-establish the Islamic Emirate in Afghanistan," said Mujahid, who says he draws a monthly salary of 14,000 Afghani ($180), plus $128 for internet and mobile expenses.

"Now many diplomats from various countries seek an audience with our leaders and follow us on social media," he added.

"After 17 years of struggle, we are winning the actual war and the digital war against infidels and the puppet regime established by the Americans to govern Afghanistan."

Afghan and Western officials dispute both statements. Government forces and their military allies, they say, are inflicting heavy casualties on the Taliban on the battlefield, and continue to launch air strikes to destroy their camps. The Taliban`s media operation is dismissed as misinformation.

"Their false claims and exaggerated reports have reached an absurd style beyond any reason," said Colonel Knut Peters, the spokesman for NATO-led Resolute Support in Afghanistan, who closely tracks Taliban statements.

"They are obviously trying to boost their own self-confidence while their fighters are dying in large numbers."

Since October, US and Taliban officials have held talks aimed at preparing the ground for US forces to withdraw from Afghanistan in return for a Taliban guarantee that the country will not be used as a base for militant attacks elsewhere.

In recent months, the Taliban have repeatedly rejected calls to declare a ceasefire, and instead intensified their attacks on Afghan forces and government offices.

Afghan journalists who have been covering the Taliban since the 1990s said before the advent of social media the group sent out hand-written pamphlets and news reports to Afghan reporters based in Pakistan and Afghanistan.

But a tendency to exaggerate casualties inflicted undermines the Taliban news operation`s credibility, he said.

In April, for example, the Taliban reported its fighters had carried out a successful attack on Bagram, the largest US airbase in Afghanistan about 50 km (30 miles) north of Kabul, in which it said dozens of foreign service personnel were killed or wounded.

The US officials in Kabul denied the attack had taken place.

"If you send them a query they respond very fast, but accuracy is always a question. Propaganda is part of fighting, the Taliban are very good at it," Kakar said.

Mujahid and Ahmadi accept there have been numerous instances when they have published unsubstantiated claims of attacks and that sometimes fighters have presented an exaggerated version.

"There are allegations that our communication is rife with sensationalism and embellishment but we never abandon the truth," said Ahmadi. "We correct it immediately."

The government is also often accused of inflating its battlefield reports. A senior defence official familiar with the situation acknowledged the government often under-reports casualties among Afghan forces, while readily providing numbers for Taliban militants they say they have killed.

There is no independent confirmation of the figures given by either side, making it impossible to fully assess the on-the-ground situation.

The Taliban`s communications operation, which is now run at an annual cost of 25 million Afghanis ($323,000), started out as a small office in Kabul when the Islamists ruled the country from 1996 to 2001 and have expanded since they were ousted.

"Despite the threats, we now run an efficient media office," said Ahmadi, a graduate in religious studies. "But maintaining haze around our identity is more crucial now as we are winning and the enemy is getting increasingly frustrated."