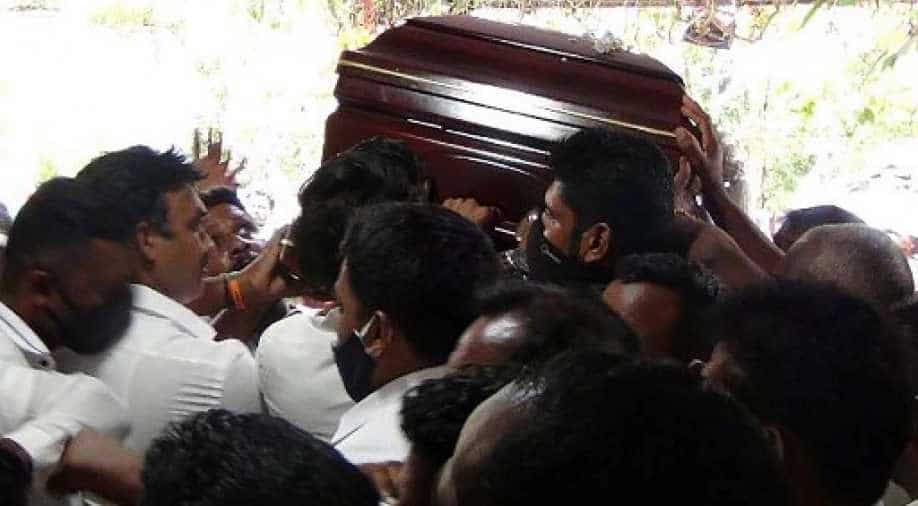 Party supporters breaching social distancing rules carry the coffin of Arumugam Thondaman, leader of a tea plantation union and a minister in the central tea capital of Nuwara Eliya, at his home constituency in Nuwara Eliya district on May 30 Photograph:( AFP )

Large crowds were seen jostling to bid farewell to Arumugam Thondaman, the leader of a tea plantation union and a government minister.

Sri Lankan authorities fear a fresh outbreak of coronavirus infections after thousands of mourners paid their respects to the body of a respected union leader on Saturday, defying a curfew and social distancing rules.

Large crowds were seen jostling to bid farewell to Arumugam Thondaman, the leader of a tea plantation union and a government minister.

The 55-year-old died of a heart attack on Tuesday and is due to be cremated Sunday at Nuwara Eliya, in the country's tea-growing highlands.

Authorities had imposed a 24-hour curfew in an unsuccessful attempt to stop crowds from visiting Thondaman's body.

A statement by a group of government doctors warned the funeral "could undermine public confidence in measures taken so far to contain the spread of the virus and lead to a second wave."

The doctors expressed "displeasure" over the public farewell for Thondaman at a time when health authorities had asked people to restrict funeral attendees to close family members.

Sri Lanka has reported 10 deaths and 1,559 infections since the island country identified its first COVID-19 patient in January.

"Crowd control has been difficult. Distraught supporters have tried to push down police barriers to get into a building and pay their respects," a police officer in the area said.

Large crowds had also gathered at the office of his Ceylon Worker's Congress party in Colombo to view his body before the funeral procession went east for final rites.