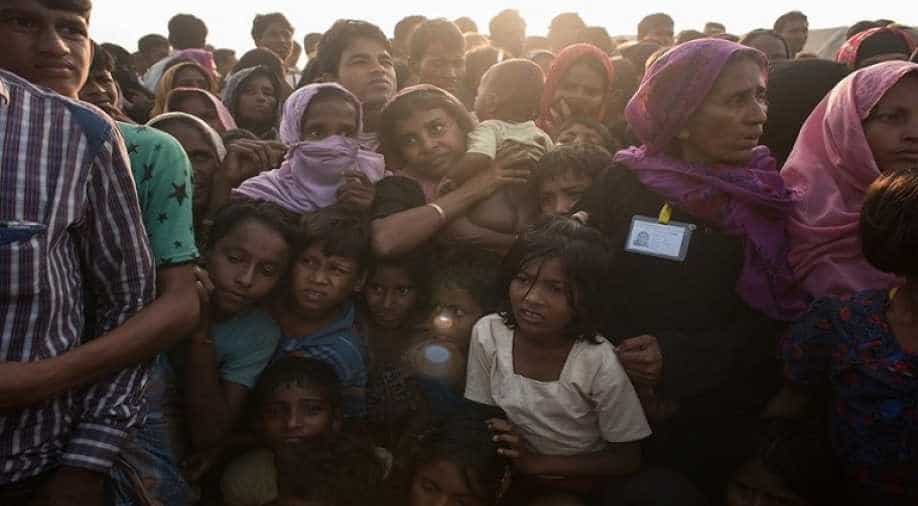 Rohingya holed up in a border "no man's land" after fleeing Myanmar will only accept repatriation to their home villages, a local leader said today, rejecting any move to transit camps for fear of long-term confinement.

Some 700,000 Rohingya have been driven into neighbouring Bangladesh since last August by a major army crackdown -- purportedly intended to "clear" northern Rakhine state of militants from the Muslim minority.

The UN describes it as a campaign of ethnic cleansing against the Muslim Rohingya, an allegation staunchly denied by mainly Buddhist Myanmar.

Overwhelmed by the influx, Bangladesh wants Myanmar to take them back and the neighbours agreed to start repatriating refugees in January. But so far no Rohingya have returned.

Since August several thousand of the Rohingya have been living in tents beyond a barbed-wire fence which roughly demarcates the border zone between the two countries, reliant on NGO food handouts.

Myanmar authorities are pressing hard for their return and have increased troop numbers on their side of the fence, accusing Rohingya militants of infiltrating the camp.

But despite the apparent show of force and looming monsoon rains, a camp leader told reporters they would not bow to pressure to return or to move forward into Bangladesh.

"We have no intention to enter Bangladesh. We are not Bengali... We are Myanmar original citizens," Dil Mohamed, 51, told reporters through barbed wire in an interview in "no man's land", during a government-steered trip through the Maungdaw border district.

Dil said the villagers -- who number around 6,000 -- would return to Myanmar only if they are guaranteed safety, compensation for the homes burned down in the army clearance and permission to resettle in their old villages.

"We don't want to go to the transit camps. We need to go directly to our homes," he said, referring to sites set up by Myanmar authorities to process returning refugees.

The international Red Cross currently provides supplies to the group, who collect it by crossing a creek and reaching the Bangladesh side.

"We don't have any vision or intention to keep them long," Ye Htut, the administrator of Maungdaw district, told reporters on Saturday as they were chaperoned around northern Rakhine by government minders.

But the repatriation process appears to be in disarray, with the international community saying continuing insecurity precludes a swift return for the refugees.

Myanmar continues to show off new reception centres and camps for refugees who do eventually return as a sign of its apparent good faith over repatriation.

Development schemes led by the army, powerful Myanmar businessmen and donor-funded ethnic Rakhine groups are abundant across the north of Rakhine, the scene of the worst violence.

Critics say the projects are shaped by military and economic priorities and are often cited on commandeered Rohingya land, effectively excluding the minority from the future of the state.

Myanmar brands the Rohingya as illegal immigrants from Bangladesh. It has systematically dismantled their legal rights and access to basic services in Rakhine, a state where many have lived for generations.