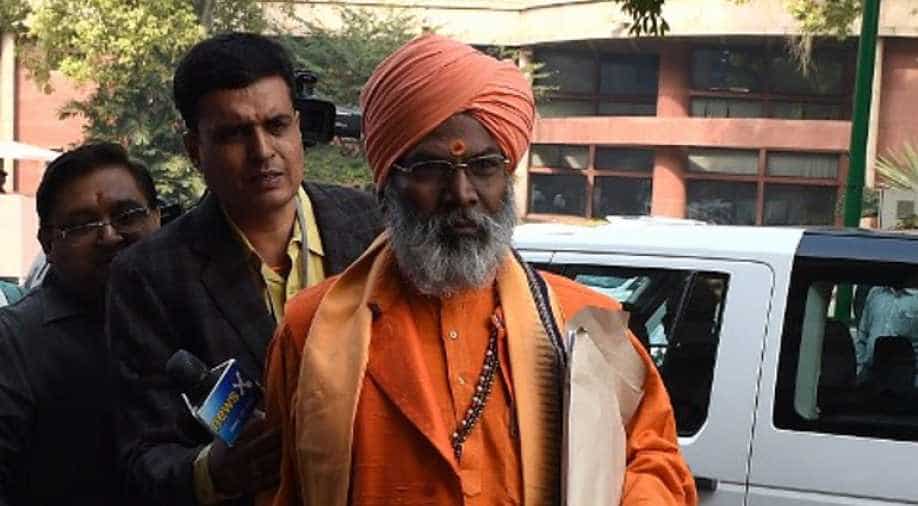 A case has been registered in Meerut against Sakshi Maharaj over his controversial comment on population control. Photograph:( AFP )

A case has been registered in India's poll-bound state of Uttar Pradesh against BJP leader Sakshi Maharaj for his comments indirectly blaming Muslims for the population growth in India.

The remarks, made in Uttar Pradesh, come days after India's top court made it illegal to seek votes in the name of religion or caste.

"Strict laws are required in this country if we really want to curb population. Parties need to rise above politics and take decision for the sake of the country," the legislator from UP's Unnao added.

The Meerut Police registered a First Information Report under Indian Penal Code sections 298 (Uttering, words, etc, with deliberate intent to wound the religious feelings of any person), 188 (Disobedience to order duly promulgated by public servant), 295A (Deliberate and malicious acts, intended to outrage religious feelings of any class) and 153b (Imputations, assertions prejudicial to national-integration).

While the BJP distanced itself from the outburst, the Election Commission has sought a report from Meerut district administration.

Opposition parties condemned the incident. The Congress said it would file a complaint against the legislator before the Election Commission.

"It is a violation of the Model Code of Conduct and Congress is officially filing a complaint against him in the Election Commission," he said.

Condemning the comments, JD-U leader KC Tyagi termed them as the first major violation of the Supreme Court guidelines on use of religion in politics outlined on Monday.

"Recently the Supreme Court and the Chief Election Commission laid down some guidelines for model code of conduct, including not to use religion, caste and language. This is the first major violation by a major political party that is BJP, by its MP. Now action must be taken by the party as well as the Election Commission against Sakshi Maharaj.

"They are making derogatory comments against one section of the society. This is violation of Model Code of Conduct to incite one section against another. And this is a criminal act," he said.

The BJP distanced itself from the comments.

"I haven't seen his statement, but we believe in taking everyone along...Country runs on law, on Constitution, it does not run with stick," said BJP leader Mukhtar Abbas Naqvi. "Such statements or views...Are not of either BJP or government. We have nothing to do with such statements."

An unfazed Maharaj made it clear that he was not speaking at a BJP event.

"I had said that the population of India is approximately 132 crore. India's landmass is not increasing but our population keeps on increasing. We need to control this menace.

"We have got information about few comments during the 'sant sammelan' held at Augharnath Temple here through various newspapers. We have sought reports on it from Election Commission. ADM city and city magistrate are investigating the matter from all aspects. We will take prompt action according to law if we find anything," District Magistrate B Chandrakala said.