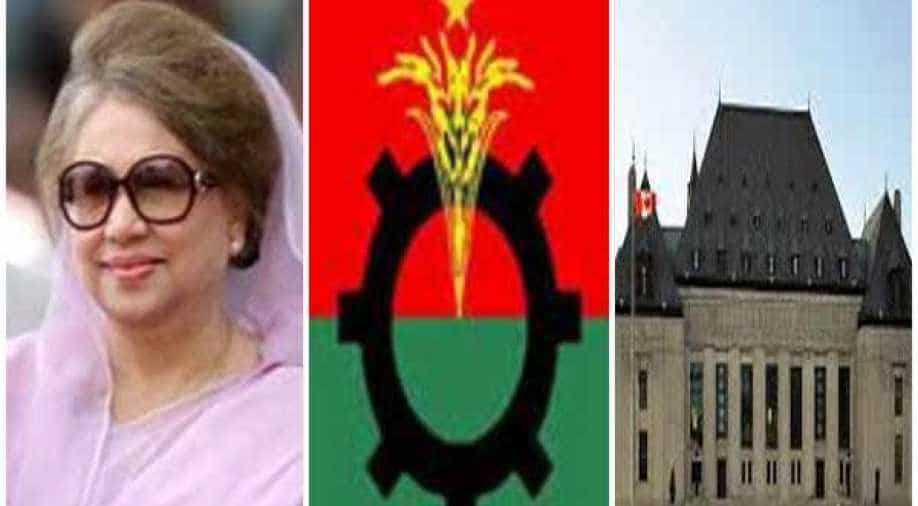 Federal Court Judge Justice Henry S Brown upheld the immigration official's previous assessment that there were reasonable grounds to believe that the BNP was a terrorist organisation.

Federal Court Judge Justice Henry S Brown upheld the immigration official's previous assessment that there were reasonable grounds to believe that the BNP, based on its activities, was a terrorist organisation, as defined under Canadian law.

Judge Brown concluded that the BNP willfully engaged in terrorism and violence to further its objectives in Bangladesh.

He dismissed the judicial review application in the two cases on grounds that the applicants were members of the BNP, which there were reasonable grounds to believe was engaged or will engage in "acts of terrorism".

The first ruling was given in the case of Gazi Vs Canada (Citizenship and Immigration), in which the applicant was Mohammad Jewel Hossain Gazi, an activist of the BNP's volunteer front, the Swechchha Sebak Dal.

In another case, in May 2017, the Federal Court of Canada again labeled the BNP as a terrorist organisation, when Justice J Fothergill issued a verdict on an appeal of a BNP Joint Secretary and former Juba Dal member, who had filed a review petition for immigration to Canada.

Judge Fothergill said he did not find any mistakes in the Immigration Division's review, as, according to Canadian laws, many of the activities of the BNP matched the definition of terror acts and that the party used arms and ammunition, hand bombs, big swords and other means of violence to meet their political objectives.

According to sources, both of these cases are a clear reflection of the image of the BNP.

It is an image that has been built as a result of its actions over the years. In the last two decades, the years that the BNP was in power in Bangladesh witnessed widespread Islamic radicalisation in Bangladesh. Further, BNP leaders have blatantly propped up terror groups, using them as proxies and allowing them a free run in the country. For instance, during the BNP rule in the early 2000s, the cadres of the terror outfit Harkat-ul Jehad al Islami-Banglaedh (HUJI-BD) were used by the party to carry out attacks against political rivals.

Current Bangladesh Prime Minister Sheikh Hasina narrowly escaped one such attack on August 24, 2004, when she was addressing a rally, but 24 of her party members died in this attack.

Similarly, British High Commissioner Anwar Chowdhury also narrowly escaped a grenade attack in Sylhet in 2004, also carried out by HUJI cadres. The BNP, though out of power since 2009, still continues to indulge in such activities.

During its last term in office, the BNP had formed a coalition with the radical Islamic party, the JeI-BD. This party has now been declared illegal due to its role in the genocide against Bangla-speaking people in 1971.