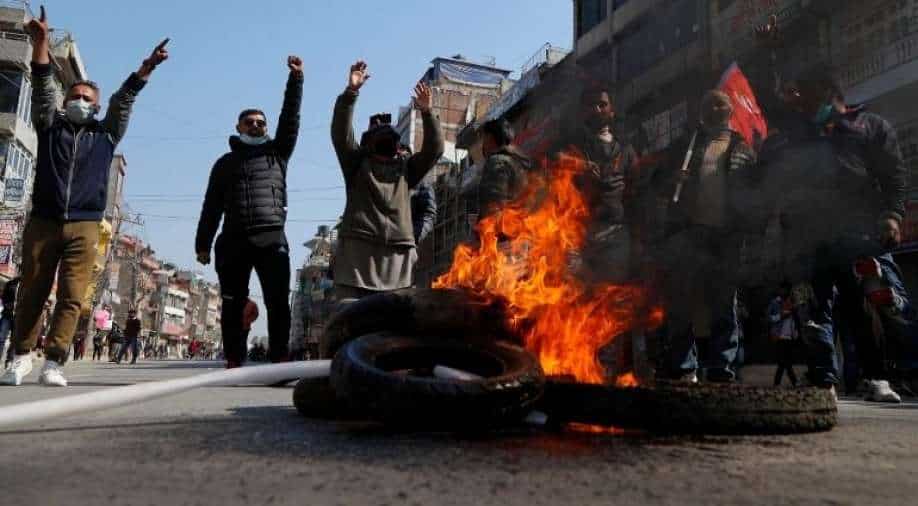 Major markets, educational institutions, offices and factories were shut down while transport services were disrupted during the strike

The normal life was paralysed across Nepal on Thursday during a nation-wide general strike called by the Nepal Communist Party's splinter faction-led by Pushpa Kamal Dahal 'Prachanda' to oppose the appointment of office bearers and members of various constitutional bodies by Prime Minister KP Sharma Oli-led caretaker government.

Major markets, educational institutions, offices and factories were shut down while transport services were disrupted during the strike.

The government had mobilised at least 5,000 security personnel in Kathmandu Valley to prevent any untoward incident. Only few motorbikes were seen moving around the capital city since morning.

Meanwhile, police have arrested at least 157 cadres of the Prachanda-led faction for enforcing the general strike in different parts of the country.

"Eighty people have been arrested from the Kathmandu Valley, while the remaining 77 were arrested from outside the Valley," Senior Superintendent of Police Basanta Kunwar, spokesperson for Nepal Police, told reporters.

According to the Metropolitan Traffic Police Kathmandu, a taxi was set on fire by demonstrators near Gongabu Bus Park early in the morning. Another taxi and a microbus were vandalised at Swoyambhu and Chabahil areas on the outskirt of Kathmandu.

President Bidya Devi Bhandari appointed as many as 32 office bearers to 11 constitutional bodies on Wednesday morning.

On Wednesday, Chief Justice Cholendra Shamsher Rana administered the oath of office to almost four dozen people in various constitutional bodies in the presence of President Bhandari. The Prachanda-led faction has alleged that they were appointed unconstitutionally.

Narayan Kaji Shrestha, spokesperson for the Prachanda-led faction of the party, has termed the appointment of the office bearers and members of various constitutional bodies by caretaker Oli government as unconstitutional and said that it shows autocratic tendency of the government.

The caretaker government has no right to make new appointments and also reshuffle the cabinet, he said, pointing to the latest cabinet reshuffle by Prime Minister Oli.

Nepal plunged into a political crisis on December 20 after 68-year-old Oli, known for his pro-China leanings, in a surprise move dissolved Parliament, amidst a tussle for power with Prachanda.

His move to dissolve the 275-member House sparked protests from a large section of the NCP led by Prachanda, also a co-chair of the ruling party. The Prachanda-led faction had been holding protest rallies and pubic gatherings in various parts of the country, including Kathmandu.

Oli, who is the chairperson of a faction of the NCP, has said he was forced to dissolve the House after knowing that the Prachanda-led faction was planning to file a no-confidence motion against him and introduce an impeachment motion against President Bhandari.

Oli-led CPN-UML and Prachanda-led NCP (Maoist Centre) merged in May 2018 to form a unified Nepal Communist Party following victory of their alliance in the 2017 general elections.