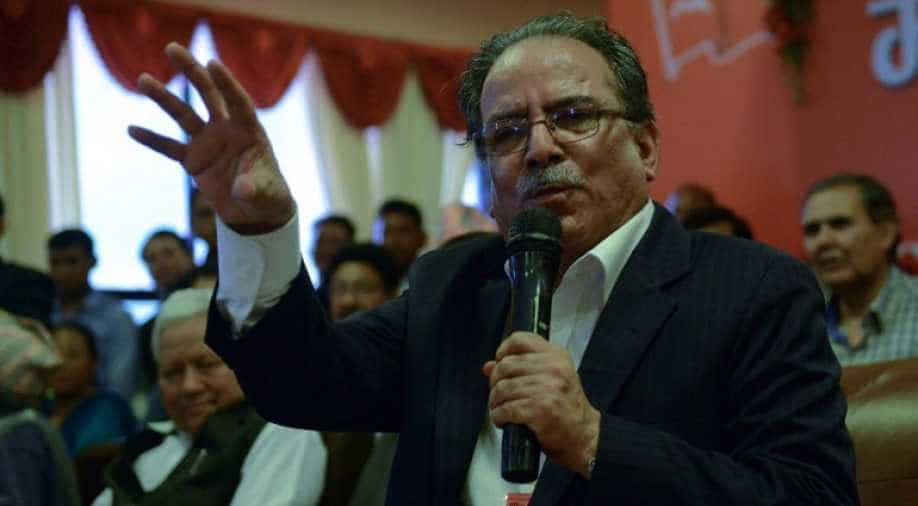 Marking his first 100 days in office, Maoist leader Dahal, who is better known by his nom de guerre Prachanda or 'the fierce one', said that addressing the demands of the protesting parties was his top priority.? Photograph:( AFP )

Nepal`s Prime Minister Pushpa Kamal Dahal pledged on Friday that amendments to the country's divisive constitution would be presented to parliament within a month as he attempted to stave off fresh political turmoil in the quake-hit nation.

The Himalayan nation was rocked by months-long protests and a border blockade by demonstrators unhappy with the terms of the constitution adopted in September last year.

Marking his first 100 days in office, Maoist leader Dahal, who is better known by his nom de guerre Prachanda or "the fierce one", said that addressing the demands of the protesting parties was his top priority.

"The constitutional amendment proposal has been prepared and we are trying to garner agreement on it," Dahal told reporters.

"The amendment proposal will be registered at the parliament within a month."

Failure to make progress on the changes to charter felled previous prime minister K P Sharma Oli who resigned minutes before facing a no-confidence vote in parliament in July.

Kathmandu has shuffled through three prime ministers since it adopted the new constitution and Oli's rule came to an abrupt end after former Maoist rebels deserted his fractious coalition, accusing him of reneging on past deals.

"The recent talks have been positive, but we want to see results," said Rajendra Shrestha of the Federal Socialist Forum, part of an alliance that represents the protesting parties.

"If the government keeps missing deadlines, we will be compelled to take to the streets again," he said.

The new charter, the first drawn up by elected representatives, was meant to bolster Nepal's transformation to a democratic republic after decades of political instability.

But ongoing discussions between the government and protesters over the charter,particularly over the rights of different ethnic groups, have failed to yield agreement.

More than 50 people have died in clashes between police and protesters, who say the constitution has left them marginalised.