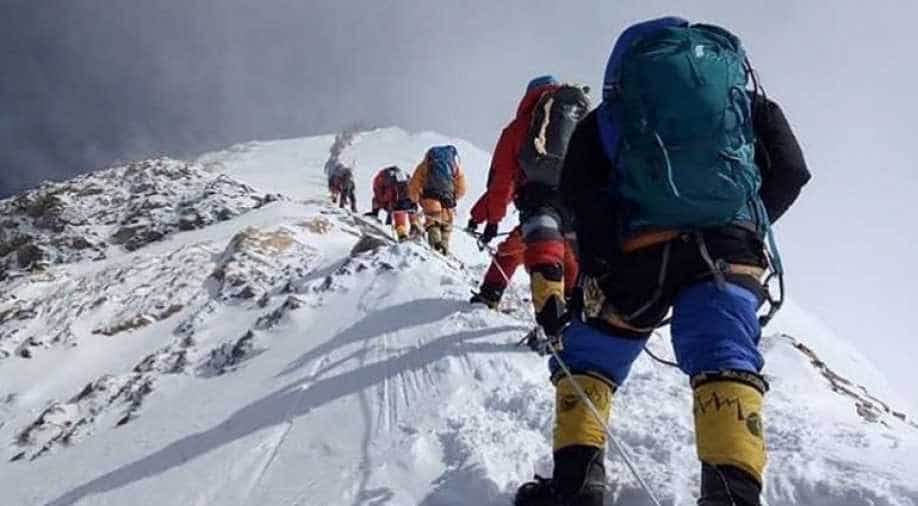 File photo: Mountaineers ascend on their way to the summit of Mount Everest, as they climb on the south face from Nepal. Photograph:( AFP )

The requirement is being proposed after a deadly traffic-clogged season saw 11 climbers die on Everest, which some experts blamed on inexperience.

Climbers wanting to take on Mount Everest will first have to tackle another Nepal mountain of at least 6,500 metres under new proposals by a committee seeking to improve safety on the world's highest peak.

The requirement is being proposed after a deadly traffic-clogged season saw 11 climbers die on Everest, which some experts blamed on inexperience.

"These recommendations have been made to ensure the quality and safety of Nepal's mountaineering tourism," Ghanshyam Upadhayay, tourism ministry official and head of the committee told AFP.

The committee also proposed a fee of at least $35,000 for Everest and $20,000 for other mountains over 8,000 metres, amid criticism that cost-cutting by expedition organisers was jeopardising climbers' safety.

"We will take this forward by amending the laws and regulations... we will make our mountains safe, managed and dignified," Tourism Minister Yogesh Bhattari told reporters.

For years, Kathmandu has issued Everest permits to anyone willing to pay $11,000, regardless of whether they were rookie climbers or skilled mountaineers.

This year record 885 people climbed Everest, 644 of them from the south and 241 from the northern flank in Tibet.

Nine of the 11 deaths were on the Nepal side, and at least four of the deaths this season were blamed on overcrowding.

A traffic jam forced teams to wait for hours in freezing temperatures to reach Everest's 8,848-metre (29,029 feet) summit and then descend, increasing the risk of frostbite, altitude sickness and exhaustion from depleted oxygen levels.

But experts say the bigger killer was inexperience among a new wave of ill-prepared mountaineer tourists.

"This is a good opportunity to improve the sector. If we want things to change the suggestions have to be implemented," said Santa Bir Lama, president of Nepal Mountaineering Association, who was also part of the committee.

Nepal is home to eight of the world's 14 highest peaks, and foreign climbers that flock to its mountains are a major source of revenue for the country.