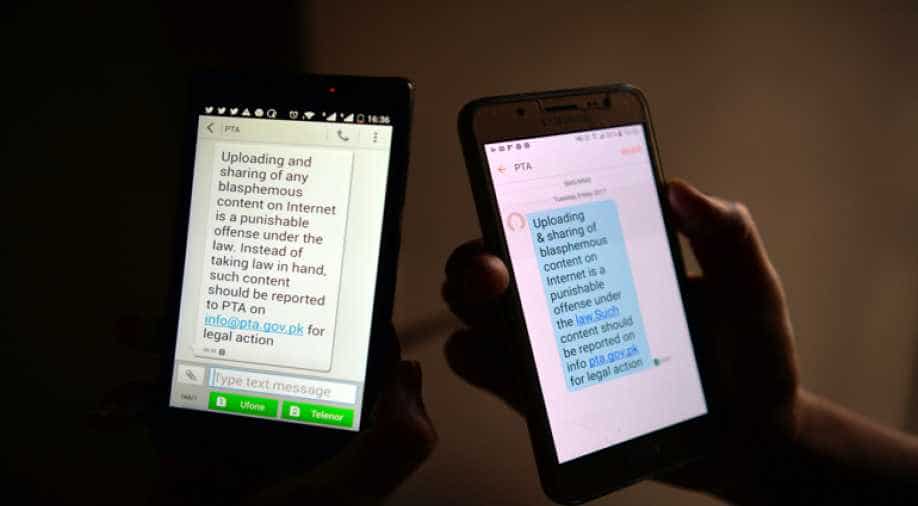 Pakistani cellphone users read a text message circulated by the Pakistan Telecommunication Authority (PTA) on their mobile devices in Islamabad on May 10, 2017. Photograph:( AFP )

Millions of Pakistanis have been receiving text messages from the government warning them against sharing "blasphemous" content online, a move rights activists said would encourage more vigilante attacks.

It comes amid a surge in mob violence linked to accusations of insulting Islam including three attacks within the past month.

"Uploading & sharing of blasphemous content on Internet is a punishable offense under the law. Such content should be reported on info@pta.gov.pk for legal action," read the SMS sent by the Pakistan Telecommunication Authority (PTA) to all mobile phone subscribers.

A similar note was posted on the agency's website in Urdu. A PTA spokesman said the agency was acting on a court order.

Blasphemy is a hugely sensitive issue in conservative Muslim Pakistan, with unproven allegations leading to dozens of mob attacks or murders since 1990.

The law was originally inherited from Pakistan's former colonial masters Britain, but strengthened by former dictator Zia-ul-Haq in 1986 to include a provision for capital punishment in cases of insulting the Prophet Muhammad.

Activists said the initiative would likely encourage lynchings, such as the killing of a 23-year-old student known for his liberal views at the hands of hundreds of fellow students last month.

"This mass messaging will only further fuel hatred among different sects and segments of the society. It is a very very bad move," digital rights activist Shahzad Ahmad told AFP.

Last week a 10-year old boy was killed and five others were wounded when a mob attacked a police station in an attempt to lynch a Hindu man charged with blasphemy for allegedly posting an incendiary image on social media.

Weeks earlier a mob attacked a mentally ill man claiming to be a prophet at his local mosque. He was later saved by police.

The issue of blasphemy came to the fore in January when five secular activists known for their outspoken views against religious extremism and the powerful military were disappeared, presumed abducted by state agencies according to opposition parties and international rights groups.

Four of them were later returned to their families weeks later, but not before they were tarnished by a virulent campaign to paint them as enemies of Islam deserving execution.

One of them later told AFP they had been held and tortured by the shadowy Inter Services Intelligence agency which had conceived the blasphemy campaign in order to silence critical voices.