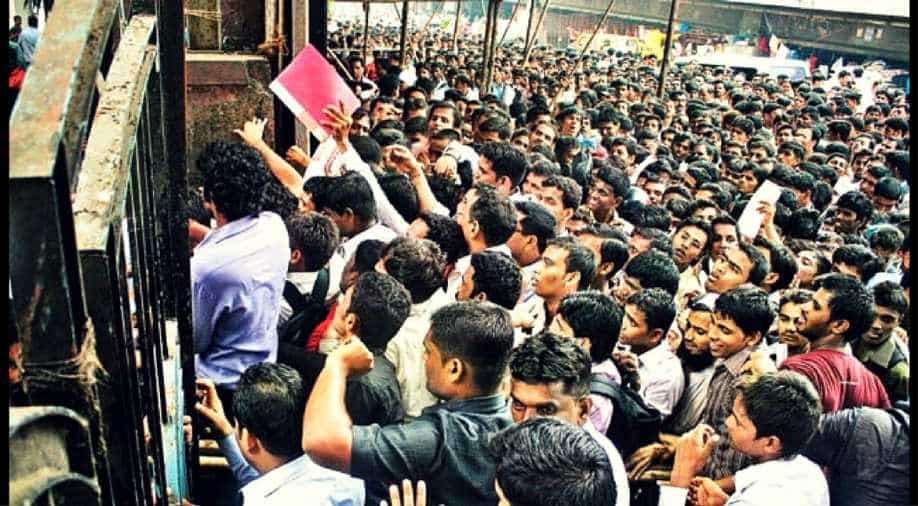 'It was not possible to provide formal sector jobs to everyone in a country of 125 crore people', says BJP President Amit Shah Photograph:( DNA )

First, consider the numbers. Between 2003 and 2009, the high growth years of the economy, when GDP grew by 8 per cent per year on average, the number of good jobs, that is, jobs in the formal sector of the economy, grew at not even one-tenth that number. Look at it another way. Every year millions of new aspirants enter the job market to compete for a few hundred thousand new jobs.

Even the lowest paid government jobs regularly attract such large numbers of extremely over-qualified applicants that violence ensues in the wake of examinations.

Now let us descend to the ground. We witness enormous agitations for reservations in government jobs rising from traditionally dominant castes, such as Jats, Patels, and Marathas. Around two weeks ago, in West Bengal, 2.5 million young men and women appeared for an exam for 6000 Group-D positions in the state government. Graduates and post-graduates had applied for these positions which require an elementary school certificate and with the pay of Rs. 16,200 per month.

One increasingly popular term captures all this: “jobless growth.” While this phenomenon has been known at least since the mid-1990s, and is observed across the world, it is becoming a hot political issue. And not a day too soon.

What is the economy for, anyway? It is always a good question to ask whenever we risk getting lost in GDP numbers, policy reforms, and stock market movements. These are all means to an end, viz. enabling all of us to enjoy fulfilling, creative, happy lives. In a market economy, adequate regular money income is a precondition for such a life. Yet our economy continues to deny this precondition to the vast majority of its workers. So, while GDP grows at some of the fastest rates seen across the world, the number of people who are able to enjoy a good life increase at a much much slower rate. And even this increase is very uneven across regions, occupations, castes, genders, and religions with some, like displaced farmers and artisans seeing declines in their living standards.

Riding a wave of resentment against the previous regime, the Prime Minister himself made jobs a central issue during his campaign. But three years later, not much has changed and the BJP government is being seen as a failure on the job creation front. After several weeks of bad press on this issue, a few days ago, BJP President Amit Shah issued a statement that it was not possible to provide formal sector jobs to everyone in a country of 125 crore people. This is a telling as well as an astonishing statement. Telling because it admits to a truth that few would admit to. That under the present set of policies (whether BJP or UPA) universal employment is impossible. Astonishing because for decades the transition to a completely formal economy has been the very definition of development. That we, and many other countries, have failed at acheiving this is surely an indictment of our policies. But are we then giving up on development? Or are we redefining it? And if so how? There is no answer.

Regular salaried workers account for only 20 per cent of all workers in India.

The intense hunger for even the lowest paid government jobs comes as no surprise once we take a look at the Ministry of Labour numbers on earnings in the Indian labour market. According to the most recent Employment-Unemployment Survey of the Labour Bureau (2014-2015), regular salaried workers account for only 20 per cent of all workers in India. Earnings from either self-employment or casual wage work (both of which together account for the remaining 80 per cent of the workforce) fall far short of a secure, decent, livelihood.

Successive governments at the Centre and in the states have embraced liberalisation and privatisation policies that have failed to generate jobs.

Of course, the current government in Delhi must take its share of the blame for the jobs crisis. But there is plenty of blame to go around. Successive governments at the Centre and in the states have embraced liberalisation and privatisation policies that have failed to generate jobs.

But the problem goes beyond India too. In the 1950s-80s, in Japan, Korea and the other “East Asian Miracle countries”, rapid GDP growth generated a vast number of jobs. This shifted a predominantly agricultural workforce to manufacturing and services. Not only that, jobs were created in the formal sector.

In contrast, in India and China, particularly since the 1990s, despite high levels of growth, formal employment generation has been slow. This is a general phenomenon across Asia. Manufacturing, in particular, is a big concern. In the 2005-2011 period, according to National Sample Survey data, manufacturing employment in India increased by 6 million while that in construction increased by 25 million. Construction accounted for half of all new non-agricultural jobs added in this period. The “Make in India” campaign aims to generate 100 million jobs by 2022 in the manufacturing sector. While the goal is laudable, given trends reported above, this seems unlikely to materialise. And Amit Shah’s statement, referred to earlier, seems to indicate that backpedaling on this issue has started already.