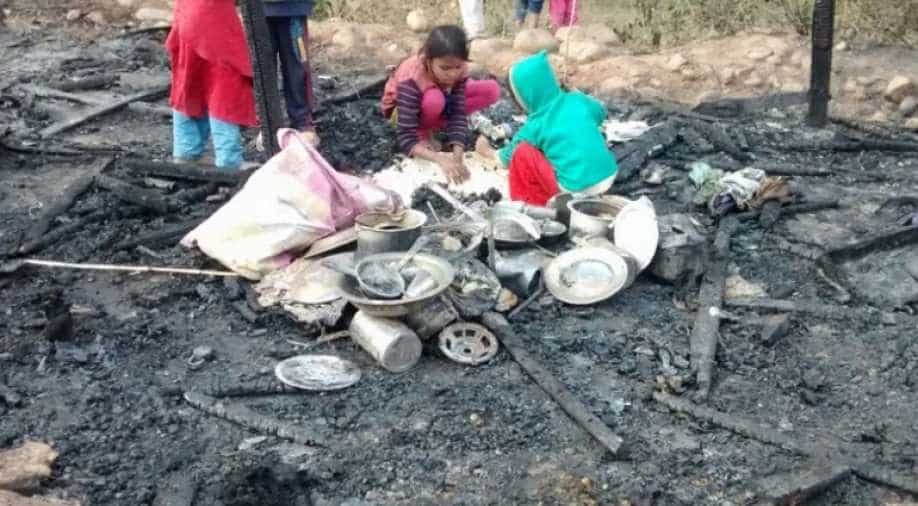 The fire started around 12 am in the Narwala area where many Rohingya Muslims reside along with other communities. Photograph:( ANI )

Tragedy struck Myanmar’s Rohingya Muslim refugees on Friday night when a massive fire engulfed their shanties leaving four people including three children dead and reducing their colony to ashes at the Narwal area of Jammu.

The Jammu and Kashmir government has ordered an enquiry to find out the cause of the fire.

The incident occurred on Friday night when the refugees were in deep sleep. Fire emanated from one of the shanties and within no time, flames engulfed the entire colony. Four people, including three children and a woman, were charred to death as they could not be rescued as huge flames were shooting up into the air.

Nearly 70 shanties were reduced to ashes.

Deputy inspector general of police, Jammu-Kathua range, Ashkoor Wani told DNA that the fire started at around 1 am and engulfed the entire juggies. “Four people have died and five are injured. All of them are from Myanmar”, he said.

District development commissioner of Jammu, Simrandeep Singh, said the plot of land was rented out by a local on which they had set up juggies. “It was not a colony. They (Rohingyas) were kept on rent by a private person”, he said.

Singh said an enquiry has been launched to find out the cause of the fire. “Action will be taken against the person who had kept them on rent”, he said.

Official figures reveal as many as 14 Rohingya Muslims, who are living as refugees in Jammu, have married the locals. Information provided in the state's legislative assembly recently revealed that the state is playing host to as many as 13384 foreigners.

Ladakh region, Jammu and Samba districts are the main areas where the foreigners, mostly Tibetan refugees, live. 10 of these refugees are being held in jails under the Public Safety Act (PSA) and three of them are facing trial.

Figures reveal that around 36,000 Rohingyas are living in different parts of the country after they fled the persecution in Myanmar.