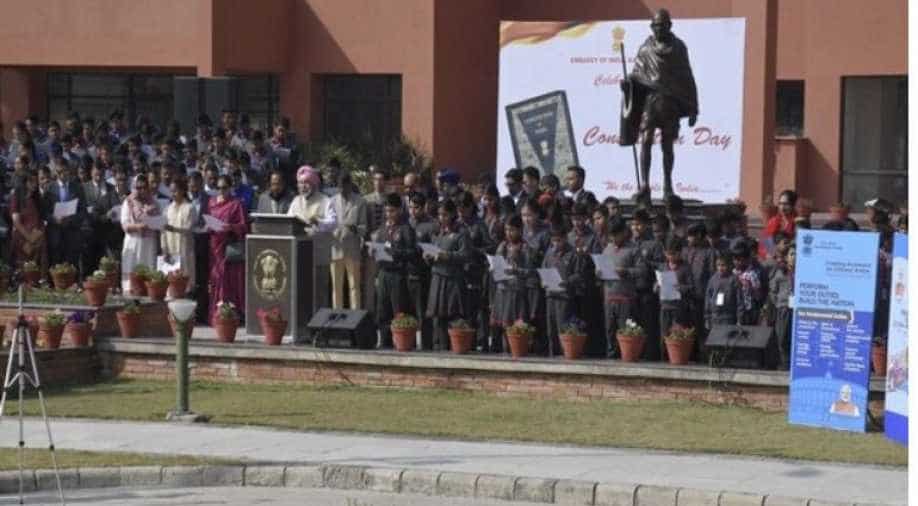 The programme started with taking an oath of the Indian Constitution by the officials working in the Indian Mission as well as the students who were present there.

The Indian Mission in Kathmandu on Tuesday marked 70 years of promulgation of the Indian Constitution by organising a function that was attended by more than 500 people.

The programme was attended by the chief of the Indian Mission to Nepal, Manjeev Singh Puri, and Deputy head of the Mission, Ajay Kumar, along with other senior officials working at the Embassy as well as the students from the Kendriya Vidyalaya in Kathmandu.

The program started with taking an oath of the Indian Constitution by the officials working in the Indian Mission as well as the students who were present there.

"The Constitution of India is a very unique document. It's one of the few documents in the world which has tried to build together; federal aspects as well as a strong unifying central force," Puri said while addressing the event.

Puri also said that the Constitution of India is one of the driving forces for unity in the world's biggest democracy. He further said that it is an inspiration for other countries.

"Nepal in particular for those who had opportunity the of studying it's constitution you will find, of course, there are differences, it's their own country it's their own approval but so many basic concepts and the structure, in fact, tends to follow what was done by the founding fathers of the Republic of India in 1949 and 1950. I think this is the matter of great pride for us," the ambassador remarked. Numerous performances were also held within the premises of the Indian Mission to celebrate the occasion.

The Constitution of India, one of the longest written Constitutions of the world, was adopted on November 26, 1949. It constitutes of a Preamble, 22 parts with 395 articles and 8 schedules.