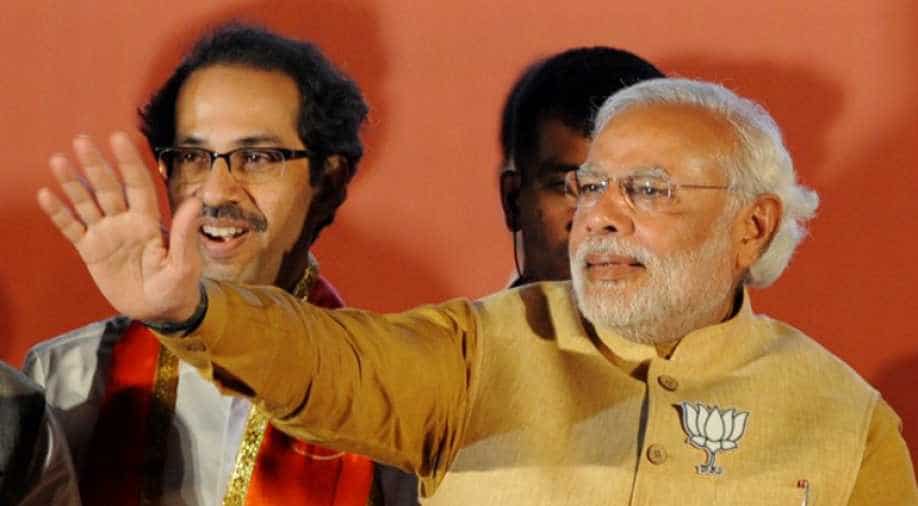 Soon after, chief minister Devendra Fadnavis said that his party, the BJP, would "take along those who come with us and leave aside those who don't".

Power aint our ultimate goal but a medium of devpt.We'll take along those who come with us &leave aside who dont.Transformatn is inevitable!

"In future, the Shiv Sena will furl its flag in Maharashtra alone, it will not knock on anyone's doors for a coalition," the Shiv Sena chief had said earlier.

In 50 yrs of Sena, 25 years were wasted because of alliance. We're not greedy for power: Shiv Sena president Uddhav Thackeray

He also clarified that the current alliance would stay but the parties would face-off in the municipal corporation of Greater Mumbai polls (MCGM).

Uddhav Thackeray also accused the BJP of harbouring "goons" (gundas) in the party and said they didn't have the capacity to fight with the Shiv Sena's "foot-soldiers" (sainiks). BJP hit back by saying that talks had failed because the party was firm about keeping the civic body ''corruption-free".

They (BJP) have many gundas in their party but we don't have gundas, we have mawlas (sainik): Shiv Sena president Uddhav Thackeray pic.twitter.com/AtAMjbGFlN

If someone is sad about our wish to make BMC corruption free,then no compromise from our side. We'll bring in transparency:Kirit Somaiya,BJP pic.twitter.com/Oz3b52sfDB

"I am ready to go solo, the Shiv Sainiks are ready to go solo. I want strong foot soldiers with me who have the courage to launch a frontal attack and not back-stab. Once I have taken my decision, I do not want anybody to question it," Udhav Thackeray had said while addressing party workers in Mumbai today.

Talks between the ruling alliance partners for the tie-up for the civic polls in Mumbai and other parts of the state had reached a dead-end in the last few days.

"If you promise to stand by me, I have taken the decision to go solo in Maharashtra. I will not go to anybody's door with a begging bowl for an alliance and won't be at anybody's mercy. I have decided that there will be no alliance for any of the municipal corporation or zilla parishad polls," Thackeray said.

The decision came a day after Nationalist Congress Party (NCP) chief Sharad Pawar's name was announced in the list of Padma awardees. He will be honoured with the Padma Vibhushan, the country's second-highest civilian award after the Bharat Ratna.

Shiv Sena sources told NDTV the party read it as an intention of the BJP to form an alliance with the NCP.

"One of the Padma awards was probably 'gurudakshina' (a gift for a teacher)... today the nation wants to know what I have to say but what the Shiv Sena has to say (to it)," Thackeray said in his address to party workers today.

The Sena and the BJP fought the assembly elections separately but later joined hands after the BJP fell short of a majority.

Elections to MCGM and other municipal corporations in the state including Nashik, Pune, Kolhapur and Nagpur will be held on February 21.