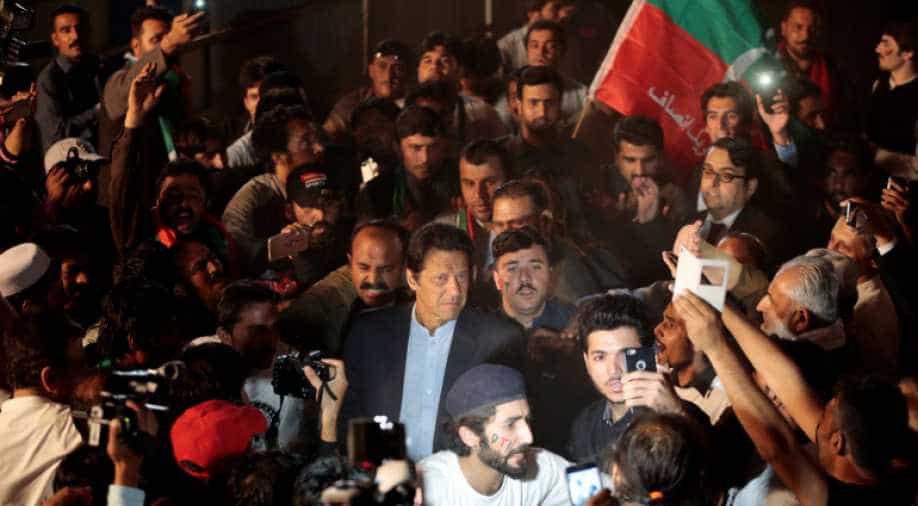 Khan`s (centre) threat of a 'shutdown' protest had sparked fears of a repeat of demonstrations in 2014, where thousands of his supporters paralysed Islamabad`s government quarter for several months over allegations of election rigging.? Photograph:( Reuters )

The court on Tuesday agreed to Khan's request to set up a judicial commission to probe Khan's corruption allegations against Sharif, stemming from revelations that his children owned offshore companies in the tax haven of the British Virgin Islands.

Khan then backed down on his threat to paralyse Islamabad by bringing in a million protesters, defusing tensions after days of clashes between his supporters and the police.

Instead he decided to hold a "celebratory" rally on the edge of the capital, where he accused Sharif and his younger brother Shahbaz, the chief minister of Punjab province, of being responsible for the clashes between police and supporters of his Pakistan Tehreek-e-Insaf (PTI) party.

"Hopefully within this month ... we will see the end of the dark night of the Sharifs," the former cricketer told tens of thousands of supporters.

"My anger is against these two cowards, these jackals of Pakistan, for making (Pakistanis) fight one another."

The Supreme Court is due to hold its first substantive hearing on the matter on Thursday.

Sharif's ruling party has said it will participate in an investigation into Panama Papers revelations but rejected an opposition demand that it should focus principally on Sharif's family. The Court has said it will set the terms of the commission itself if the parties cannot agree on them at once.

Sharif's family denies wrongdoing, and there was no mention of Sharif himself owning any offshore companies.

Holding offshore companies is not illegal in Pakistan, but Khan has implied that the money and London apartments held by the companies, amounting to millions of dollars, were gained by corrupt means.

Khan's threat of a "shutdown" protest had sparked fears of a repeat of demonstrations in 2014, where thousands of his supporters paralysed Islamabad's government quarter for several months over allegations of election rigging.

In a bid to foil the "shutdown", authorities arrested scores of PTI supporters and shut a major motorway leading from Khyber Pakhtunkhwa province, Khan's political heartland.

The capital was calm on Wednesday, though there was still a heavy police presence.

Khan admitted in May that he himself had used an offshore company to legally avoid paying British tax on a London property sale.