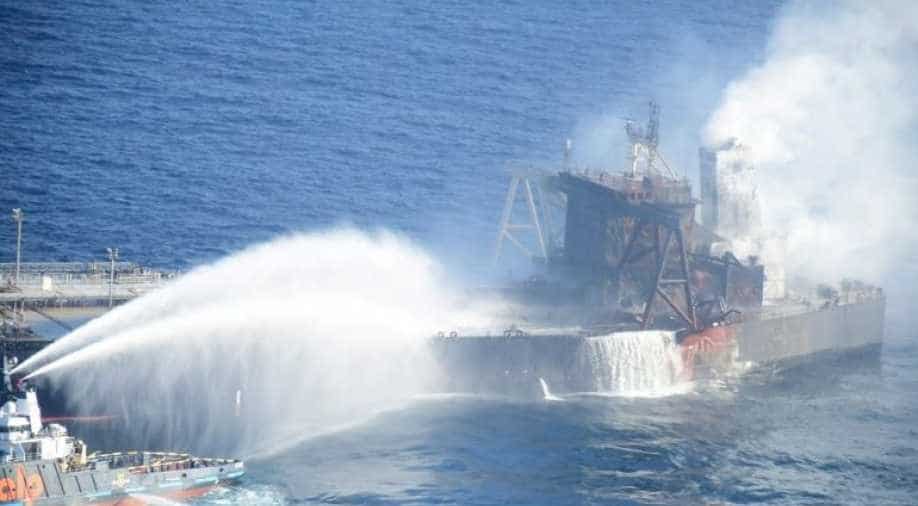 A Sri Lankan Navy boat sprays water on the New Diamond, a very large crude carrier (VLCC) chartered by Indian Oil Corp (IOC), that was carrying the equivalent of about 2 million barrels of oil, after a fire broke out off east coast of Sri Lanka September Photograph:( Reuters )

Fire fighters are again battling flames aboard a fully loaded oil supertanker off Sri Lanka, the island's nation's navy said on Monday, four days after fire first broke out on the New Diamond.

"Fresh flames have risen in the funnel section of the MT New Diamond Supertanker and fire fighters are battling the fire using foam to contain the blaze," said the Navy spokesman Captain Indika de Silva, adding that the fire had not reached the oil cargo of around 2 million barrels.

A fire first broke out last Thursday in the engine room and spread to the bridge of the very large crude carrier, chartered by Indian Oil Corp for importing oil from Kuwait. That blaze was doused on Sunday.

Tugs had been spraying water onto the ship on Monday to keep the metal cool, but high winds ignited the flames once again, de Silva said.

"We are spraying water on to the ship to keep it cool as there are several small fires still burning," he said, adding that salvage operations were expected to begin shortly.