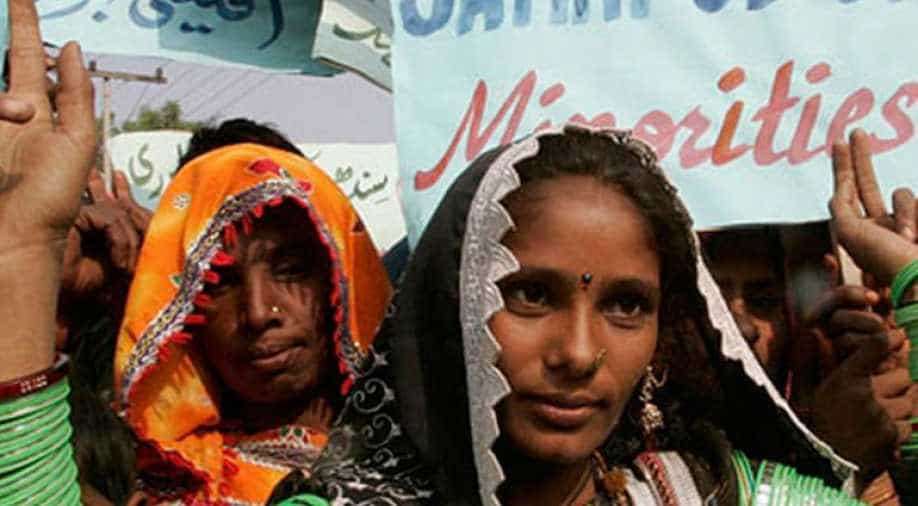 Hindu activists and families allege that young girls are abducted, coerced into converting to Islam, and married off to Muslim men in an organized manner. Photograph:( Zee News Network )

Case after case of minority Hindu girls being forcibly converted to Islam are being presented before courts in Pakistan's Sindh province, has left the community deeply unsettled and with a sense of alarm.

An article authored by freelance journalist Saba Imtiaz and published in The Atlantic, has said, "The allegedly forcible nature of the conversions, the almost identical pattern of the cases, and the targeting of minor girls have deeply unsettled the Hindu population, which constitutes about two percent of Pakistan's approximately 200 million people."

Imtiaz further goes on to state that this sense of alarm has led some Hindus to even reassess their place in Pakistan 70 years after its creation and the partition of the Indian subcontinent.

Cases of forced conversion are mostly reported from Sindh. Although Pakistan became a Muslim-majority state post-partition, with Muslims dominating politics, the economy, and society, Hindus managed to retain a degree of social influence in Sindh province, where they were known as successful merchants.

The discrimination that this minority community faces in Pakistan is with those who are declared lower-caste and have low incomes.

According to Imtiaz, this section of Hindus in Sindh experiences a form of economic servitude.

"They face social discrimination and are often cut off from the Hindu community at large. A 2015 report by the South Asia Partnership-Pakistan argued that social, cultural, economic, and religious factors have combined with feudal power structures in rural areas to enable forcible conversions," she says.

According to the most recent available census, over six percent of Sindh's population is Hindu.

Hindu activists and families allege that young girls are abducted, coerced into converting to Islam, and married off to Muslim men in an organized manner.

Muslim religious activists and leaders are defensive about conversions, believing that converting someone to Islam is a way of earning blessings.

These conversions are often backed by powerful shrines, seminaries, and clerics, as well as local politicians. Seminaries and shrines protect the couple and say the girl willingly eloped, converted, and married.

This dichotomy poses a challenge for both lawyers and activists, who have to figure out if these marriages are born of free will or are marked by threats and violence.

And, according to Imtiaz, who is based in the Middle East, and has authored two books - "Karachi, You're Killing Me!" and "No Team of Angels", almost invariably, the girl's testimony that she exercised her right as an adult to marry settles the case, while her parents continue to insist she is being pressured by influential followers of the shrine where she converted to Islam.

Forced conversions has been a national talking point since 2012, when three Hindu girls were reported to have been forcibly converted to Islam and married to Muslim men.

The cases went to Pakistan's Supreme Court. One of them was a girl called Rinkle Kumari, whose conversion took place at a shrine associated with a legislator who was then part of the Pakistan People's Party, which governed the country at the time.

In court, the women said they wanted to live with their husbands, though activist Mangla Sharma, a member of the Pakistan Hindu Council, told me Kumari wanted to go back to her parents. The court said the women were free to be with their Muslim husbands.

Young girls aren't the only ones being targeted for conversion, as according to Imtiaz, mass conversions of Hindu families are taking place in Sindh.

The Sindh legislature passed a bill in 2016 outlawing forcible conversions and conversions before the age of 18. The landmark legislation faced instant criticism from hard-line religious groups-including the Jamaat-ud-Dawa, widely believed to be the public face of the militant network, Lashkar-e-Taiba, which is accused of carrying out the 2008 attacks on landmarks in Mumbai. Right-wing groups banded together to form an opposition movement.

The outcry led to the Sindh governor declining to sign the bill into law.

In the absence of a law explicitly banning forced conversions, activists and lawyers are zeroing in on the cases of minor girls, using a different law that outlaws all marriage in Sindh below the age of 18.

Young girls aren't the only ones being targeted for conversion. Mass conversions of Hindu families are taking place in Sindh, and many are reported to be lower-caste Hindus. Seminaries and clerics offer money and housing to new Muslim converts; they issue press releases when they convert someone to Islam, believing this to be a considerable achievement.

It's unclear how and when forced conversions became such an organized movement. Most activists say this change has taken place over the past 15 years. The spate of conversions to Islam is changing the way Hindus live in a province that has been their home for generations.

Accurate counts of the Hindus leaving their villages are difficult to come by, as there is only anecdotal evidence. As for Hindus leaving Pakistan altogether and migrating to India, one estimate put the number at 5,000 per year, says Imtiaz.

Currently, a sense of antagonism prevails between Hindus and Muslims in Pakistan, and this has increased in the last 10 or 15 years.