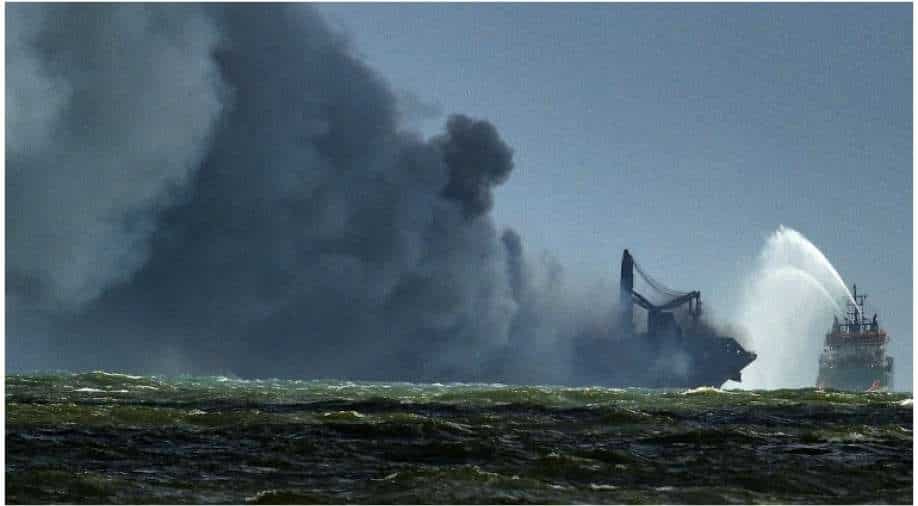 Sri Lanka's Navy ship tries to douse fire as smoke billows from the Singapore-registered container ship MV X-Press Pearl, which has been burning for the eighth consecutive day in the sea off Sri Lanka's Colombo Harbour, on a beach in Colombo on May 27, 2021 Photograph:( AFP )

The vessel is now anchored. It is carrying 278 tonnes of bunker oil and 50 tonnes of marine gas oil

An international firefighting effort is on to douse fire on an oil container off Sri Lankan coast. The country's navy on Thursday said that it may take 'days' to completely douse the fire. There are fears of a major oil leak.

Nine Sri Lankan ships and three Indian vessels have been working with international salvage experts to douse the eight-day-old inferno on the Singapore-registered X-Press Pearl. The crew of 25 persons has been evacuated.

Fire on the ship broke out when it was waiting to end the Colombo port. The vessel was carrying nearly 1,500 containers including 25 tonnes of nitric acid.

It is believed that the fire was sparked by a leak of nitric acid on the 186 metre (610 feet) long ship. Monsoon winds fanned the flames.

"I hope in another few days we can extinguish this fire completely," he told AFP.

Sri Lanka's Marine Environment Protection Authority (MEPA) has expressed fears that the vessel could break up and leak oil onto coastal beaches.

"The hull may not be stable for us to tow the ship away from our waters," MEPA chairman Dharshani Lahandapura told AFP.

The vessel is now anchored. It is carrying 278 tonnes of bunker oil and 50 tonnes of marine gas oil, she said.

Lahandapura said the crew of the ship knew about a nitric acid leak on May 11 before entering Sri Lankan waters. She said if the crew had acted properly, the fire could have been avoided.

The ship's operator, X-Press Feeders of Singapore, confirmed they knew about the acid leak, but said attempts to leave the leaking container in India and Qatar had failed.

It said port authorities in the two countries had rejected requests because they did not have specialist facilities.

Sri Lankan authorities have lodged a formal complaint with police ahead of initiating legal action against the ship's captain.

Lahandapura said a large quantity of oil threatens to leak and pollute the tourist and fishing region of Negombo, 40 kilometres (25 miles) north of the capital.

"Our best option is to clean the beach and we suspect any clearing operation will take a few weeks, if not months," she said.

Sri Lankan soldiers were deployed Thursday to clean Negombo beach as debris from eight containers that fell into the sea after the explosion washed ashore.

Police also arrested eight people who had been scavenging for plastic raw materials and cosmetics that washed up for violating coronavirus lockdown regulations.

The fire on the New Diamond tanker took more than a week to put out and left a 40 kilometre (25 mile) long oil spill. Sri Lanka has demanded the owners pay a $17 million clean-up bill.