Demonetisation is a vaccine against black money: Minister Venkaiah Naidu defends move that has discomfited people 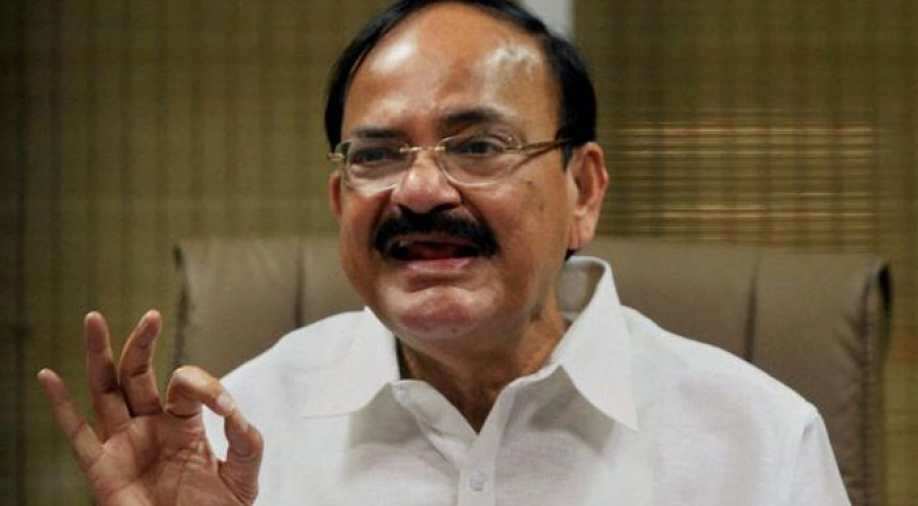 India's Union minister of Urban Development, Housing and Urban Poverty Alleviation and Information & Broadcasting in the Narendra Modi administration took time out to speak about the merits of demonetisation, the concept of nationalism and his party Bharatiya Janata Party's chances in Uttar Pradesh, which is India's largest regional elections.

WION: Has demonetisation served its purpose of taking out black money from the system?

Venkaiah Naidu:  Yes, it has done so. It is a vaccine against the scam and it has done the job.

WION: Critics say that large amount of black money is abroad and not in India and all cash is not black?

VN: This is wrong to say that most of the black money is stashed abroad. You may recall that the first decision taken was constituting a special investigation team to find the black money stashed abroad. Secondly, we also came out with a bill in Parliament on the funds stashed abroad. Then we took initiative in G20 and entered into an agreement on multiple avoidance tax treaty with Mauritus and Cyprus and then followed it up with Switzerland and then with the US on FETA. PM (Prime Minister Narendra Modi) has been consistent. He also gave time to people to declare their (unaccounted) money. He has been doing things systematically. The black money is now in the open and this is the biggest achievement. Every rupee is being accounted for.

WION: The scheme has caused public inconvenience. Could it have been avoided?

VN: It was not possible. It was like a cancer spread across the country. The entire system was affected. Serious action was required. In 1971, the former finance minister YB Chavan recommended demonetisation. Justice Wanchoo committee also recommend it. But the previous governments didn’t act on it. In the 80s, benami  (without name) transaction bill was passed but the government did not notify it. We did it. In 2012, the Supreme Court of India directed the government to form a mechanism to bring back black money. This government did it. UPA (the previous government) slept over it. The chemotherapy has been administered under our regime. People welcomed it as a game-changer. People wanted drastic action and we have done it. We have 130 crore (1.3 billion) population. We had parallel economy, drug mafia, high number of fake notes and a neighbour which promotes terror etc. All of them were using black money. We delivered a death blow and that is why there is so much hue and cry. I admit that there is inconvenience. It might continue for few more days because people are used to (having) cash (on them). Arrangements could not be made because advance information could not be given. It is a temporary pain for long term gain.

WION: When will the caps go? When do we expect the liquidity to return to normal?

VN: The prime minister has already assured that pain will be eased step by step

WION: On this issue, the opposition did not allow the (India's) parliament to function. Do you expect demonetisation to cast its shadow on the budget session as well?

VN: I hope it doesn’t happen. Parliament is a place for debate and discussion, but that could not happen. The Opposition wanted a debate but they later avoided and instead disrupted the parliament. They then went to the president. The government was willing and the prime minister was ready to respond. In fact, the debate had started and Opposition had fielded Anand Sharma, Pramod Tiwari and Manmohan Singh (to debate in the parliament). Mayawati , Ram Gopal Yadav, Piyush Goel and others, including me, spoke (about the merits of cash scrap) but they (the opposition) changed the goal posts and asked for the prime minister (to address their concerns). And when the prime minister came on the floor, the opposition didn’t allow the house to function. They lost a golden opportunity for a debate. It was a proper forum to highlight the issue but they missed it.

WION: There is a perception that senior leaders of BJP and Congress don’t talk unlike the days when Vajpaye was the prime minister?

VN: Everyone has a different style. Vajpayee’s style was different, Modi’s style is different and so was (Jawaharlal) Nehru, Indira (Gandhi) and Rajiv's (Gandhi) style. The prime minister told the opposition that we are ready for discussion but it didn’t happen. I always tell the opposition: I propose, you oppose and let the House dispose.

WION: Rahul Gandhi (the de facto opposition leader) has attacked Modi on issues of demonetisation and Sahara papers. Your response?

VN: Rahul Gandhi is behaving in most irresponsible and immature manner. My personal advice is that he should graduate himself otherwise he would be failing himself and his party in the process. The personal criticism has been out of frustration. Congress has called Modi names. They (Congress) first called him 'maut ka saudagar' (death merchant), then Rahul Gandhi called him Hitler, Mussolini and Gaddafi. The former external affairs minister (Salman Khurshid) called him impotent. This has not helped them and their stature has gone down.

WION: The principal charge of the opposition is that 50-odd families are being helped through the process of demonetisation?

VN: Absurd and meaningless. They shouted slogans in the parliament (accusing us of helping the Adanis and Ambanis, two large business conglomerates in the country). Adani and Ambani were not born during Narendra Modi’s regime. They were born and brought up during the Congress-led governments. Who are these 50 families and how did they prosper? 1.86 lakh crore of the bank money which has become NPA (non-performing assets) was all given during the Congress regime by these people. All concessions to Ambani and Adani were given by them. Now in order to portray us as pro-business and anti-poor, they (the opposition) are shouting these slogans. We are different. We feel that both industry and agriculture are equally important. Each should be respected. There are black sheep in the media. Every sector has a black sheep. We are looking to take action against them. Vijay Mallya was given loans during the Congress regime. The loans were restructured during the Congress tenure.

WION: BJP in 2016 was able to makes its presence felt in the Northeast (of India) by winning Assam. What are the party's prospects in Uttar Pradesh (India's largest state)?

VN: Absolutely. BJP is becoming an all-India party. When I joined this party, people would make fun of me that I’m joining a Brahmin-baniya, urban-north India party. Today we have lawmakers across the country. We will win Karnataka. We have done well in Kerala. Our vote share has gone up. In Tamil Nadu, we have chances due to the demise of Amma (Jayalalithaa; she died earlier this month). In UP, the stakes are high but we are confident of winning. We got 71 seats (of 80 seats) during the general elections in the country (in 2014). People have seen the performances of the other regional players in the state and are not happy. The alternative to Samajwadi Party and Bahujan Samajwadi Party -- the hitherto dominant parties in UP -- is BJP

WION: Doesn’t it worry you that demonetisation might impact BJP adversely?

VN: That is what is being discussed by the media. But in reality, our appeal has increased at the grassroots level. This is the feedback I’m getting from Uttar Pradesh. Look at the result of Chandigarh (a Union Territory in India). We won 20 seats. A lot of people from Uttar Pradesh stay there. We did well in Maharashtra, Gujarat and Rajasthan local body elections as well. We won all the elections after demonetisation.

WION: The prime minister has invested his political capital in a scheme like demonetisation. Do think it was worth the risk?

VN: Yes, it was worth taking. We have not come to rule the country. We want to develop it. He is known for taking risks. He has taken it up as a challenge. He went for a surgical strike against our neighbour, who were interfering in our domestic affairs. He is known for taking tough and bold decisions. He wants to improve the living conditions of the people.

WION: Last year, the debate on nationalism dominated conversations in universities and many other areas of our society. How do you see it in retrospect?

VN: What is wrong in discussing about nationalism? Nation means people and people means all communities. It means all sections of the country. It means Bharat Mata ki Jai (a slogan that hails India). It means 'Dalito ki jai, Christian ki jai, Jains ki jai, sabhi backward castes ki jai' (Victory to the Dalits, Christians, Jains and other backward castes). It encompasses every community. We should feel proud of it. Earlier, talks on nationalism would be looked down upon. Now, people feel proud and people talk about it. There nothing wrong in it.

WION: Many scholars would say that there is a difference between ethnic and civic nationalism.

VN: Those who say it are a product of 2,000 years of foreign rule and Macaulayism. This education system has gone into our heads. The influence of socialist model has also affected us.  People have changed, the political mandate has changed but people in certain sections who were well entrenched, there minds have not changed. They have lost the battle but still holding key positions, like in the media. The so-called progressives and the leftists have not changed with the times either.

There was a big clash in Dhulagarh, West Bengal. Hundreds of shops were looted and people were thrown out of houses but the so-called secular media is neither reporting it nor discussing it. On the other hand, Zee TV has reported it prominently but a criminal charge has been filed against them. People sitting in Lutyen’s Delhi, who are apparently progressive, aren’t talking about it. Is talking about Hindus a crime in this country? This is perverted secularism and that is why people have rejected it. Secondly, ultra-Leftist people take up issues happening at Jawaharlal Nehru University and shout slogans at Hyderabad University, but the society at large have remained peaceful. I don’t know why the essence of Hinduism is being twisted. Hinduism is a way of life and not a religion. We don’t want to discriminate between people on the basis of religion and race. Ever since Modi came to power, there are less communal clashes and focus is on development and good governance. Modi's opponents lost the 2014 general elections badly and that's the reason for the opponents are attacking Modi personally and indulging in a disinformation campaign.

WION: Lastly, did surgical strike change the nature of play between Pakistan and India?