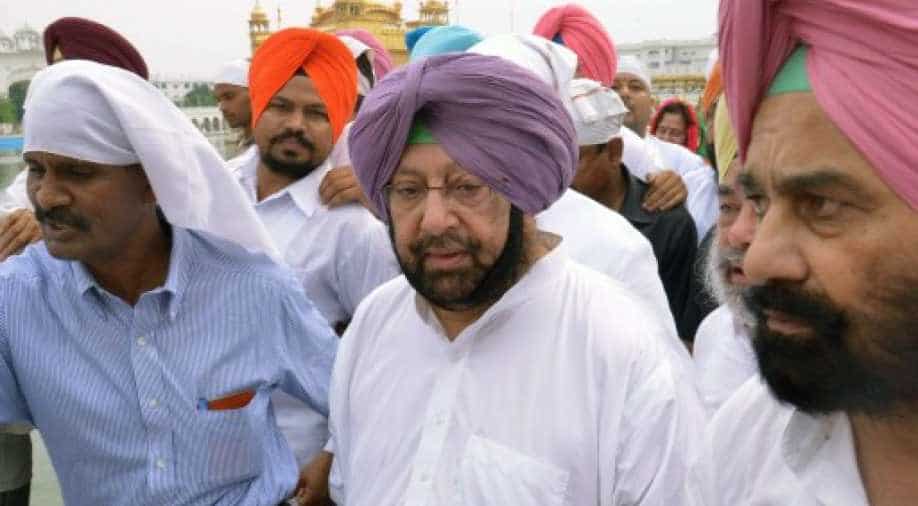 Kejriwal said Captain Amarinder Singh (centre) was bankrupt before he became the chief minister of Punjab state in 2002. Photograph:( AFP )

Kejriwal, who came to power on the back of a hugely popular anti-graft campaign in India, alleged that Captain Amarinder Singh and his family members accumulated wealth while he was the chief minister of India's Punjab state between 2002 and 2007.

Addressing a gathering near Bathinda city in Punjab, Kejriwal said Singh's wife Parneet Kaur opened a Swiss bank account (509018445) in 2005 and his son Raninder Singh opened another account (5090184484) on the same day.

The AAP chief also suggested that a trust being run by the Captain, as Singh is fondly called, helped him store away huge sums of money. The trust had a Swiss bank account (5090284483), Kejriwal claimed.

Captain was bankrupt when he assumed office in 2002, so much so that he didn't have enough money to whitewash his palace Moti Mahal, Indian newspaper The New Indian Express stated Kejriwal as saying.

Captain Amrinder Singh, who belongs to the royal family of erstwhile state of Patiala, has refuted the allegations, saying the charges levelled at him are a sham.

Calling Kejriwal a "paid agent" of India's finance minister Arun Jaitley, the Punjab Congress president said similar charges were made by Kejriwal's colleague Ashish Khetan in March 2016 and that they were proven to be false.

The political mudslinging has begun, a few months before India's northern state of Punjab goes to polls.