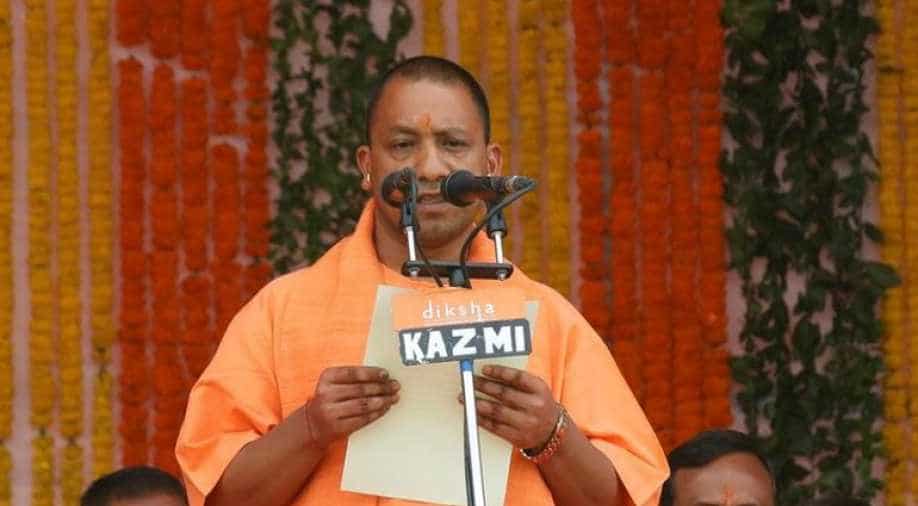 Yogi Adityanath takes the oath as Uttar Pradesh chief minister during a swearing-in ceremony in Lucknow on March 19. Photograph:( Reuters )

The District Administration in the northern Indian state's Kushinagar asked residents to take bath before attending a meeting with the Uttar Pradesh chief minister || Local officials distributed the soaps and shampoos to those attending the event, in order to make them 'look clean and smell good'

Addressing the media, Congress spokesperson Abhishek Manu Singhvi said, "Yesterday's incident at the village of Mushahar community's gathering has depicted the true face of BJP, the RSS and in particular of their CM. The true face, thought process, thinking, actions are reflected in the way soaps were distributed to the Dalit community by the officials on the instructions of Yogi Adityanath."

Singhvi asserted that Yogi Aditynath directly practiced untouchability in the way in which he gave instructions to the Dalits that they must "smell good" before their meeting."They have insulted the entire community in that village but more importantly they have most importantly insulted the very concept of Dalit in this country," Singhvi said."

Appropriate case must be registered under the very specific and powerful and wide provisions of ST/ SC act against this brazen and shocking form of untouchability and the CM and the officials must immediately unconditionally, comprehensively apologize to the entire community," he added.

Earlier, the District Administration in Uttar Pradesh's Kushinagar asked the residents to have a bath before attending a meeting with Chief Minister Yogi Adityanath so they "smell good". To ensure the instructions were followed, soaps, shampoo and perfumes were distributed among the villagers.

The members of the Mushahar community were called to attend a vaccination program for the eradication of Encephalitis, a campaign started by the Chief Minister in Kushinagar's Kasiya division.

Five children from the community were to be vaccinated under the campaign from the area. Ahead of the event, local officials distributed the soaps and shampoos to those attending the event, in order to make them "look clean and smell good."

Ahead of the event that the Chief Minister was going to attend, roads were paved, toilets were fixed overnight and streets were cleaned up in the village.Chief Minister Yogi Adityanath launched Encephalitis vaccination campaign in the state from Mainpur village in Kushinagar.

Earlier, the administration in Deoria had received much flak for placing air conditioners, sofas and carpets at the house of a Border Security Force (BSF) martyr when Chief Minister Yogi Adityanath went to his place to give the compensation cheque.