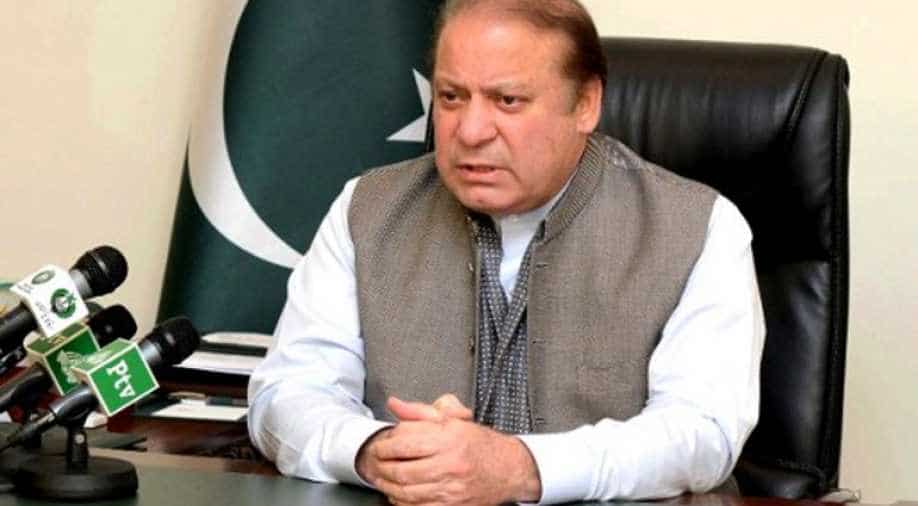 Sharif also attended a presentation made by China's National Energy Administration (NEA) on the construction of Bhasha Dam, a project which he said is of critical importance for the future of Pakistan. Photograph:( AFP )

China and Pakistan today signed six pacts to boost cooperation on the USD 50 billion China-Pakistan Economic Corridor, including one on building an airport at the strategic Gwadar port city, with President Xi Jinping asserting that ties with Islamabad were a priority.

The pacts were signed in the presence of Pakistan Prime Minister Nawaz Sharif and Chinese Premier Li Keqiang ahead of the much-publicised Belt and Road (B&R) Forum beginning tomorrow.

After the MoUs and agreements were signed, Xi told Sharif that the bilateral ties remain "a priority for China" and Beijing was willing to enrich the "all-weather" strategic and cooperative partnership with Pakistan.

Sharif also attended a presentation made by China's National Energy Administration (NEA) on the construction of Bhasha Dam, a project which he said is of critical importance for the future of Pakistan.

The pacts deal with the increasing bilateral cooperation within the framework of China's ambitious Silk Road project, upgrading the main railway track between Karachi and Peshawar - referred to as ML-1 or Main Line-1, and an MoU for the establishment of a dry port in Havelian, Radio Pakistan reported.

Three agreements were signed pertaining to economic and technical cooperation worth 3.4 billion yuan (about USD 490 million) for the strategic Gwadar port in southern Pakistan and East Bay expressway, a 19 kilometre controlled access road under construction in Gwadar.

Sharif, the only head of government to be represented at the B&R summit, is leading perhaps the largest delegation to Beijing - four chief ministers and five federal ministers.

Citing positive results achieved in the cooperation on the corridor, Li said both the sides should efficiently dovetail their development strategies, advance major transportation and energy projects as scheduled, enhance cooperation on industrial capacity, and boost a balanced development of trade.

Li expressed the hope that Pakistan will intensify its efforts in protecting the safety of Chinese personnel in the nation, and ensure the security of related projects.

On the China-Pakistan Economic Corridor (CPEC), a part of the B&R initiative, Xi said the supplementary projects in and around the Gwadar port in the restive Balochistan province should be steadily advanced and the study on the construction of industrial parks along the corridor facilitated.

The deep-water port and the CPEC is of significance to China as they together facilitate Beijing's access to the Arabian Sea and resultantly links it with Eurasia and Africa.

The Gwadar port opposite the Mumbai's port housing the Indian Navy's western naval command provides a berth for China in the Arabian Sea and to the Indian Ocean.

China has already announced plans to station its marines there as well in Djibouti in Horn of Africa in Indian Ocean.

India opposes the CPEC as it runs through the Pakistan- Occupied Kashmir. In the last few days, China tried to assuage India's feelings by asserting that the commercial corridor will not have any impact on its stand that the Kashmir issue should be settled by India and Pakistan through dialogue.

But India is not attending the high-profile B&R summit. It worries over a 3,000-km-long project connecting the Gwadar port and Xinjiang stem from the fact Gwadar, which was taken over by the Chinese, will become a future naval base.

During his meeting with Sharif, Xi stressed that a long- term planning for the corridor should be completed as soon as possible and cooperation programmes covering energy, transportation infrastructure and people's livelihoods should be promoted.

The two countries should not only continue high-level exchanges, but increase interactions between governments, legislative bodies and political parties, Xi was quoted as saying by China's state-run Xinhua news agency.

He said the two countries should strengthen cooperation on areas including anti-terrorism and security, and enhance coordination on major international and regional affairs.

Xi said China wants to deepen cooperation with Pakistan under the framework of the Shanghai Cooperation Organisation.

Sharif said Pakistan will continue to cooperate with China under multilateral frameworks such as the United Nations and the SCO to contribute to stability and development in the region and beyond. He said the China-Pakistan friendship is solid and stressed that it was a national consensus to deepen ties with Beijing and participate in the B&R initiative.

Pakistan is willing to work with China in actively implementing various projects related to the CPEC and steadily pushing forward the cooperation on energy and infrastructure construction, including the Gwadar port project, he said.

"Pakistan fully supports China's vision of the Belt and Road Forum," Sharif said at a separate meeting with Premier Li.

"Pakistan considers China its most valuable friend," he said, adding that the participation of the chief ministers of all the four Pakistani provinces at the B&R forum was an indication that "we are all one for [the success of] the China-Pakistan Economic Corridor", he said.

Sharif said that the country will accelerate the construction of the corridor and take measures to ensure the safety of Chinese personnel and enterprises.

Pakistan hoped that bilateral industrial and trade cooperation will be strengthened, and will work to facilitate Chinese enterprises' investment in the nation, he said.

After their meeting, Li and Sharif witnessed the signing of documents related to cooperation on economy and technology.

He reaffirmed Pakistan's commitment for the completion of early results under the CPEC.

Pakistan's Minister for Planning and Development Ahsan Iqbal, who is incharge of the CPEC, meanwhile told state-run APP that on the agenda of Sharif's visit to Beijing also included deals to build an airport and expressway in Gwadar.