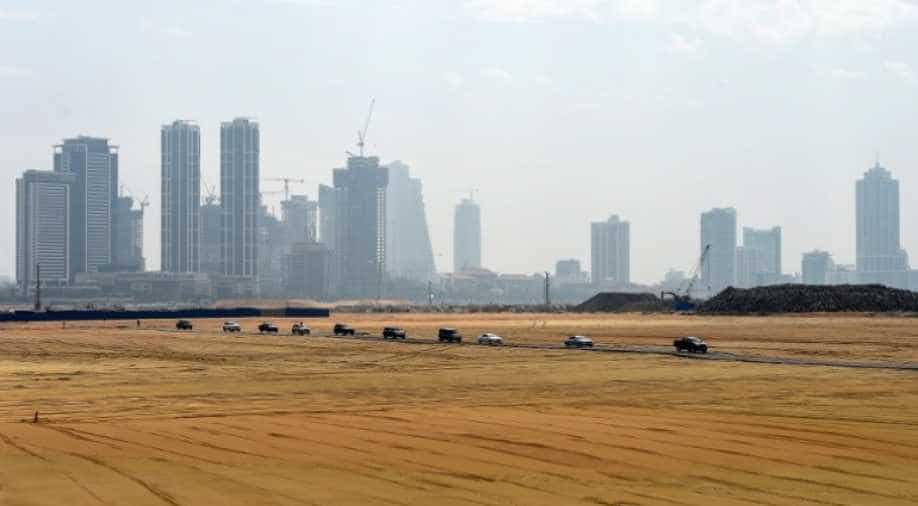 A construction site of a Chinese-funded $1.4 billion land reclamation project is pictured in Colombo. Photograph:( AFP )

The $1.4 billion Colombo Port City was agreed between China and Sri Lanka's former president Mahinda Rajapakse, one of several projects to raise fears that the strategically important location was falling into Beijing's orbit.

A Chinese state-owned company marked on Wednesday the completion of an ambitious land reclamation adjacent to Sri Lanka's capital Colombo, part of Beijing's "Belt and Road" infrastructure initiative that has alarmed India and the West.

"Colombo Port City is an important project of the One Belt, One Road initiative in Sri Lanka, which is one of the key countries along the maritime silk route," China's ambassador Cheng Xueyuan said at a ceremony.

"No matter how the international situation changes, China always facilitates great importance to Sino-Sri Lanka relations and actively implements the consensus of the leaders of the two countries," he added.

The $1.4 billion Colombo Port City was agreed between China and Sri Lanka's former president Mahinda Rajapakse, one of several projects to raise fears that the strategically important location was falling into Beijing's orbit.

On another, the $1.4-billion Hambantota deep-sea port also built by the Chinese, China in December 2017 was given a 99-year lease after Colombo said it was unable to keep up with servicing loans made by Beijing to pay for it.

The nearby Hambantota airport also funded by China and built in Rajapaske's constituency in the middle of two wildlife sanctuaries has turned into a white elephant, with no scheduled flights.

Two-thirds of the new 269 hectares (664 acres) reclamation project which is envisaged as the site of a new financial district and has worried environmentalists, goes to China on a 99-year lease.

Patali Champika, the minister in charge of the project, said however that the reclaimed area would not be a threat to Sri Lanka's sovereignty or undermine the security of regional power India.

The port of Colombo is a key hub for Indian import-export cargo and the new real estate is situated at the entrance.

China has also emerged a key political and financial backer of Sri Lanka, dislodging Japan which used to be the biggest funder of infrastructure such as ports in the island nation.

Finance ministry officials said the Bank of China had offered Colombo a $1.0 billion loan to shore up its foreign reserves amid an exodus of foreign capital from Sri Lanka's bond and equity markets.

The Chinese funding becomes crucial at a time when three international credit rating agencies downgraded Sri Lanka after a political crisis in late 2018.