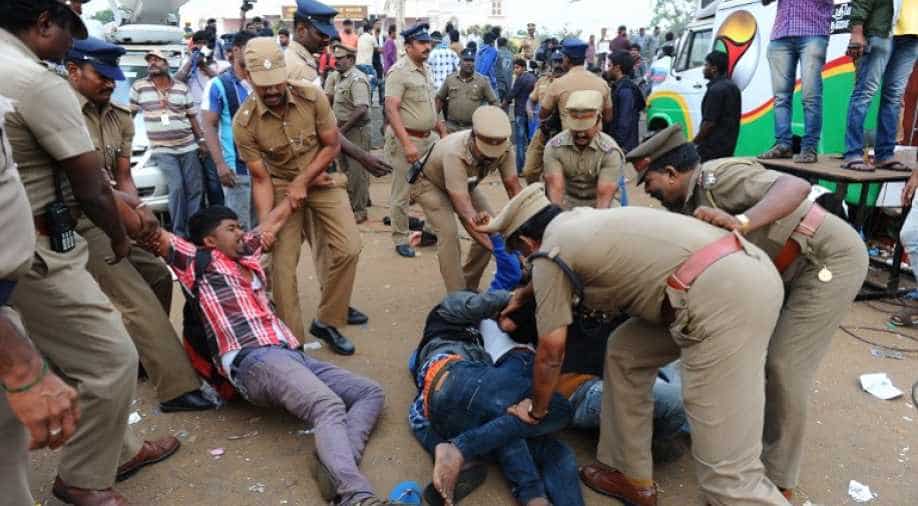 Indian police remove protesters during a demonstration against the ban on the Jallikattu bull taming ritual at Marina Beach in Chennai on January 23, 2017. Photograph:( AFP )

The Chennai police have come under fire after a video purportedly showing some police personnel setting an auto rickshaw ablaze went viral on on Twitter last evening. On Monday, the Jallikattu protests turned violent, demanding a permanent solution and not an interim stay on the ban.

The video, which was aired by a news channel, was also shared by several well-known personalties, including Kamal Haasan. Sharing a video clip on Twitter, Kamal Haasan asked, "What is this. Please explain some one".

What is this. Please explain some one pic.twitter.com/MMpFXHSOVk

According to the reports, the incident took place at Mylapore area, which is only a short distance away from the Marina Beach, the epicentre of the agitation which was vacated by late evening.

The Chennai Police said anti-social elements had "crept" into the pro-Jallikattu protests here, which turned violent and also asserted that it will not allow such persons to exploit the situation.

The Police used force only after stones were pelted at them, he claimed, adding that his police personnel had no intention to attack or harm the people.

As many as 94 cops sustained injuries while 51 police vehicles were damaged in violence.