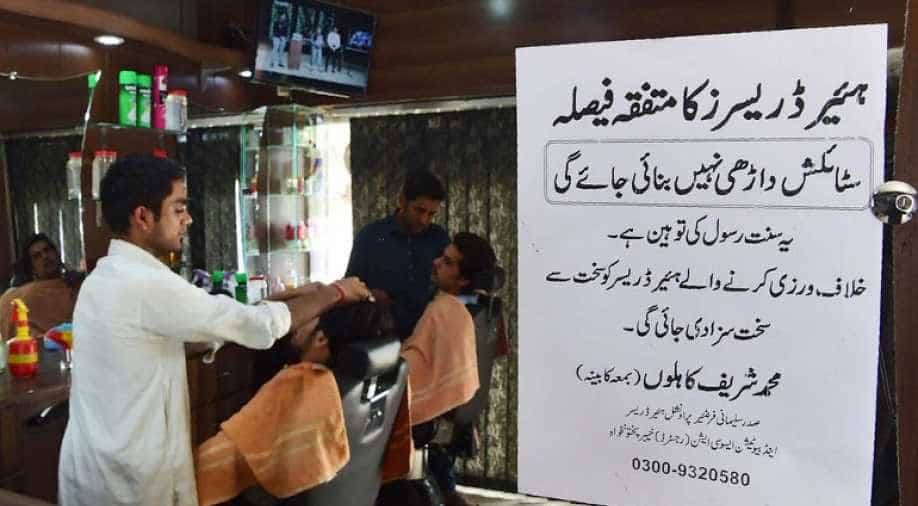 The notice sign reads "All hairdressers by a unanimous decision have decided not to offer their services for clients wishing for stylish beards. It is an insult of Sunnah of Prophet." Photograph:( AFP )

The decision affecting Khyber Pakhtunkhwa province echoes a similar ban introduced there more than a decade ago after militant groups including the Pakistani Taliban threatened barbers with dire consequences for trimming beards.

"Creating different beard designs is against the Sunnah (teachings) of the Prophet Mohammed," Sulemani Hairdressers Association president Sharif Kahlu told a press conference in the provincial capital Peshawar on Monday.

He said tens of thousands of barbers, all members of his association, have promised to abide by the decision and notices would be pasted in shops throughout the province informing customers.

Different Muslim sects adhere to different beard shapes and lengths, but the most generally accepted "Islamic" beard is one that is long enough to be visible from a certain distance, but not longer than a fistful of hair.

Kahlu strongly denied any pressure on his association from any militant organisation, calling the move "a decision of our conscience".

"We met local administrations of all the major cities and districts in the province and they assured us of their full cooperation but refused to issue any directive to make this decision official," he said.

He said there were several shops in the province, which were not members of the association. "We will try and convince them to implement the decision but will not force them at all."

Militants attacked many barber shops and saloons in the province a decade ago, calling the shaving of beards un-Islamic.

In recent years men in Pakistan's major cities like Karachi and Lahore have become more metrosexual, with the growing middle class taking advantage of a trend in male beauty salons to be selfie-ready at any time.