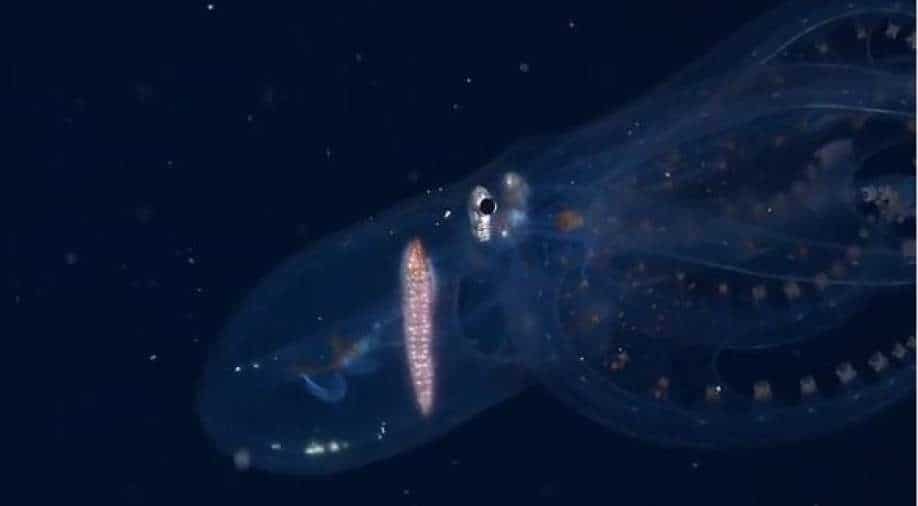 People have been fascinated by a video of a glass octopus captured by a team of experts. It's wonderful to observe the animal flowing through water while displaying its see-through skin.

Marine biologists researching seamounts in the Pacific Ocean captured images of a glass octopus with transparent skin, offering researchers a rare view of the elusive sea creature. The octopus Vitreledonella richardi has only a few visible features - its optic nerve, eyeballs, and digestive tract -

Despite scientists knowing of its existence for more than 100 years, it has rarely been captured on video.

The video was posted on Schmidt Ocean Institute’s Instagram page on June 27. And it has gone viral since.

"The Glass Octopus is a nearly transparent pelagic species of octopus found worldwide in tropical and subtropical latitudes. The only visible features of the octopus are its optic nerve, eyeballs, and digestive tract (the silvery piece in the middle). All of these organs are oriented to minimise casting shadows from below, to keep the animal hidden from predators," reads the caption.

During an expedition in the Phoenix Islands Archipelago, marine biologists aboard a study vessel for the Schmidt Ocean Institute, an oceanic research group, documented two sightings of the octopus.