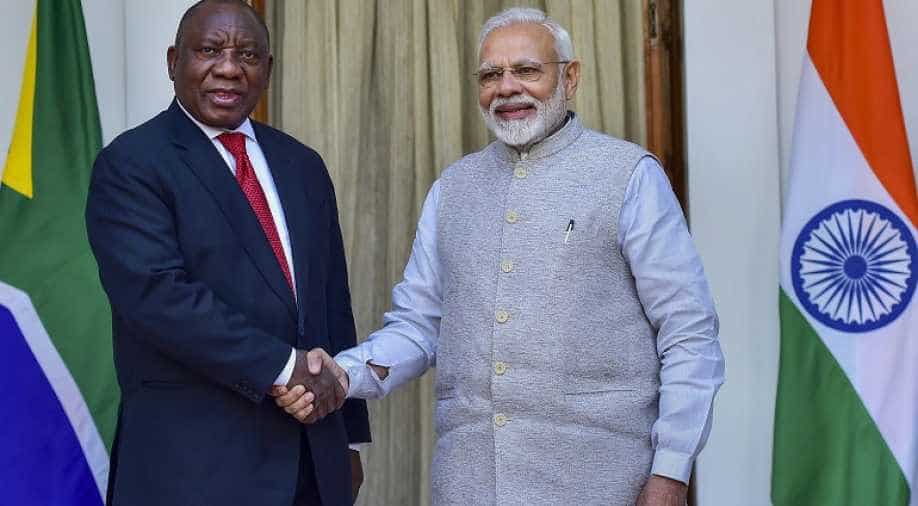 To boost ties with South Africa and other African countries, India's aim is to effectively develop a counter-balance against China.

South African President Matamela Cyril Ramaphosa was the chief guest at the 70th Republic Day Parade during his first state visit to India on January 25-26 this year.

In the post-Cold War era, the relationship between the two countries has improved significantly with India and South Africa having fostered a strategic partnership through the Red Fort Declaration of 1997 and the Tshwane Declaration of 2006.

The formation of the India-Africa Summit in 2008 has further underscored the desire of the two sides to deepen the engagement to fulfil their interests in an unpredictable regional and global order.

Over the last four years, the Modi government’s efforts have truly elevated the relationship between India and South Africa to a new height.

One highlight of this intense bilateral engagement was the participation of 41 African countries in the third India-Africa Forum Summit, held in Delhi in 2016. During these four years, several ministers of the Union cabinet, including Prime Minister Modi, have visited South Africa.

The recent visit of Ramaphosa was the latest development towards re-energising the ties.

Indeed, it gave a big boost to security and defence cooperation, with the two sides having agreed to enter into a three-year strategic engagement.

This, in turn, will serve the two countries’ interests. India and South Africa are two major regional powers in the Indian Ocean, both are strategically located and feel that cooperation between them is indispensable to maintain peace and security in the region.

It is in this context that the South African National Defence Force will participate in the first Multinational India-Africa Field Training Exercise at Pune in March this year, enabling the two forces to understand each others’ functioning.

The South African defence industry has reaffirmed its desire to work with India in the manufacturing of defence hardware under the Make in India Initiative, which is a significant step towards meeting India’s defence requirements and turning this country into an arms-manufacturing hub.

It is precisely in this light that the Ministry of Defence has lifted the ban on South Africa’s state-owned defence company, Denel SOC Ltd.

To boost ties with South Africa and other African countries, the aim is effectively developing a counter-balance against Beijing, especially when China has focused on expanding its influence in the Indian Ocean and beyond.

In 2016, the two countries set a target of doubling bilateral trade and investment to $20-billion by 2021.Over 150 Indian companies have invested in South Africa, with India having emerged as one of the top five trading partners of South Africa.

While these investments have fuelled developmental initiatives in South Africa, New Delhi sees this continent as a big market for Indian investment, goods, expertise, technology and services.

Conversely, over 29 South African companies have invested in different sectors of the Indian economy, accounting for $790 million.

The formation of the Joint Working Group on Trade and Investment and President Ramaphosa’s assurance to simplify and reform the South African business visa regime, will further strengthen bilateral trade and economic ties.

At a time when China has made huge investments in Africa and is trying to engage this continent in its Belt Road Initiative, India feels that expanding economic ties with South Africa and other African countries, would enable it to contain China’s growing clout.

Energy shortage is an important reason for India to aggressively pursue its foreign policy towards Africa. This continent has huge energy reserves, while India is an energy deficient country, importing 70 per cent of its oil needs.

Thus South Africa, which has a huge uranium reserve, can play an important role in providing sustained supply to help India’s nuclear plants.

Close ties will also enable the two sides to exert combined force for the reform of the Security Council, WTO, thereby making the global institutions reflect the reality of the present international scenario.