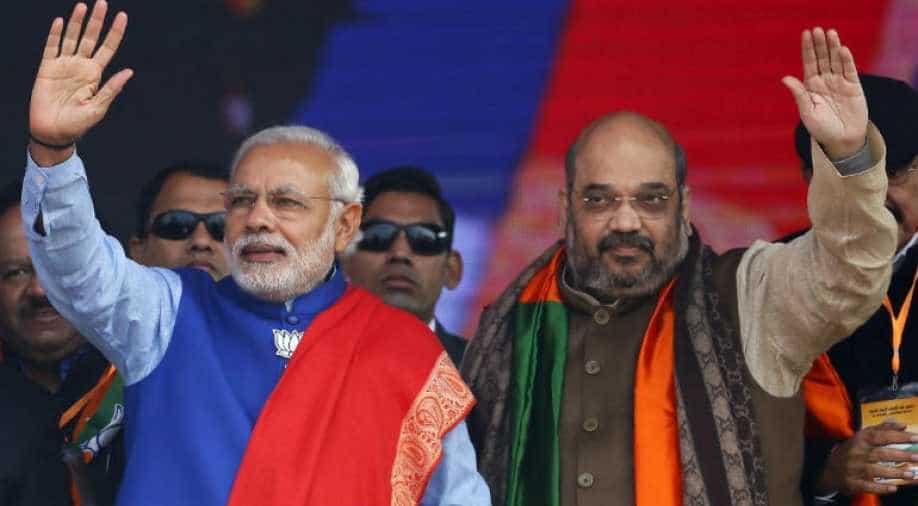 The party is likely to come up with schemes to ease the nerves of the crucial segments.

The last two months have not brought good news for the BJP. The party lost elections in the three Hindi heartland states. The CBI and Justice Sikri episodes have created unnecessary controversy.

It is facing a spirited Congress attack on social media. To top it all, the SP and the BSP have announced a formidable alliance for the forthcoming polls in Uttar Pradesh, which accounted for one-fourth of BJP’s tally in 2014. Suddenly, what looked like an easy sail through for the party in 2019, has turned into a tight, wide open contest.

BJP recognises it has an uphill task at hand and the stupendous verdict 2014 could be termed as an outlier.

The party has affected big organisational changes recently. The most important among them is the appointment of the three ex-chief ministers – Shivraj Singh Chouhan, Vasundhara Raje and Raman Singh as national vice-presidents.

The party strategy is to use the experience and charisma of these leaders, especially in the Hindi heartland and reduce the load of Narendra Modi to some extent, who can then focus on greenfield areas like East and South of India.

This step also helps soothe the taut nerves of upper caste and OBCs who form the core vote bank of the party.

In the 2014 Lok Sabha elections, these sections accounting for 60 per cent of the population, voted overwhelmingly for the BJP and its allies.

After the losses, notes of dissent have come out in the open with party veterans questioning the approach of the Modi-Shah duo.

These appointments may have been done to quell such noises. With Sushma Swaraj announcing that she will not contest 2019 polls, BJP now lacks a pan-India woman leader with mass appeal. Raje fills this gap. With many flagship schemes of the government — Ujjwala, Awas, Swachch Bharat, Saubhagya — to name only a few aimed at women beneficiaries, this strategy may pay rich dividends.

The Modi-Shah duo now wants to win at any cost and the Prime Minister has not been shy of campaigning extensively even in state polls.

Another appointment, which has caught everyone’s attention is of Gordhan Zadafia, once a bitter critic of Modi belonging to the rival Sanjay Joshi camp, who has been made in-charge of the most important state of Uttar Pradesh. The party faced a lot of flak, especially from the upper castes, for nullifying the Supreme Court order on SC-ST Atrocities Act.

The SC-STs overwhelmingly voted against the party recently in the three states where it was in power. BJP won 128 SC-ST reserved seats in these states in 2013, which fell by more than half to 59 in 2018.

A section of upper caste disillusioned with the party pressed NOTA, stayed at home, some even voting for Sapaks, a party championing upper caste rights.

The party had to face reversals in belts where upper caste formed a significant proportion of population like Gwalior-Chambal in Madhya Pradesh.

Even OBCs, staunch supporters of the BJP, switched sides in Chhattisgarh.

With this step, BJP hopes to keep its anchor voting segment in good humour especially when Congress is trying to play the Brahman card and revive its traditional vote bank of upper caste, Dalits and Muslims.

In the national convention held over the weekend, Modi exhorted the BJP cadre not to be complacent and work hard on the ground. They shouldn’t just hope Modi will come, hold rallies and swing votes. They need to take the welfare schemes of the government door to door and highlight the achievements.

As per CSDS National Election Studies (NES) 2014, 27 per cent of BJP supporters would not have voted for party if Modi was not the prime ministerial candidate.

The dip in popularity ratings of Modi and a corresponding increase in Rahul’s has cautioned BJP against over-reliance on the Modi factor.

Though a lot of credit is given to Modi for the 2014 victory, it was also a result of effort and leadership of many state leaders like Chouhan, Raman, Raje, Parrikar, mini Modis in their own might.

The call is also to them and to new leaders like Yogi and Fadnavis to work hard to realize their common dream.

The party is seeking suggestions from the public on various issues like implementation of schemes, impact of proposed grand alliance and three most popular party leaders in their constituencies, among other things.

To negate anti-incumbency, BJP is likely to deny tickets to 30-40 per cent of existing MPs, around 100 in total.

This exercise will provide information on the popularity of MPs and suggest alternatives. Though elections in India are increasingly becoming presidential in style, one-fourth of the voters gave importance to the local candidate while voting in 2014, according to NES.

The unfavourable verdict in the three states brought to the forefront rural and agri distress. It also highlighted growing urban apathy among the middle class, staunch supporters of BJP. The party is likely to come up with schemes to ease the nerves of these crucial segments.

For farmers, the party could roll out a programme on the lines of Ryathu Bandhu Scheme of Telangana, where per hectare amount will be paid out to them. The middle class could see an increase in the income exemption limit from the current Rs 2.5 lakh per annum to Rs 5 lakh per annum.

For the rural population, the possibility of doling out a UBI scheme, where Rs 2-2,500 per month will be given to BPL category, is being mentioned. The party is now pulling out all stops.