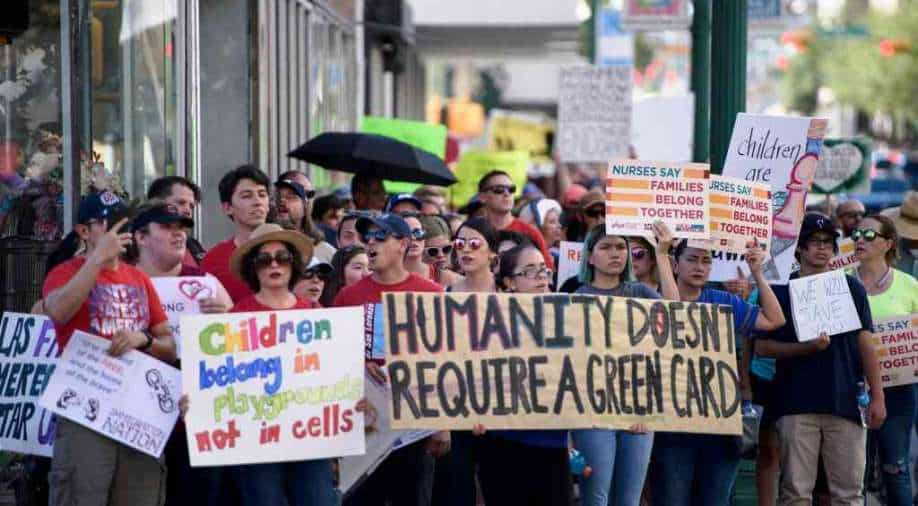 Protest against migrant protection protocols in US Photograph:( Reuters )

THE FATE OF OUR DEMOCRACY IS TIED TO THEIRS.

HARRISBURG, Pa. — Donald Trump will soon be gone from the White House. But in the millions of homes where Latino immigrants live, the questions that have dominated the past four years will not soon go away: Will I ever see my mother again? Will there be a time where I won’t live with the fear of disappearing on my way to work, never to be seen again by my neighbors? Will I be able to go to college? Will my parents ever escape the nightmare of immigration bureaucracy?

There are 11 million undocumented immigrants in this country, and millions who are the children, siblings and spouses of the undocumented; they live in the uneasy cultural and legal limbo of the “mixed status” family. And even if you’re a U.S. citizen who’s never met or worked alongside an undocumented immigrant, the fate of the democracy you cherish is tied to theirs.

This summer I traveled to central Pennsylvania to meet a family friend who is undocumented. She and my aunt and uncle were once neighbors in Guatemala City. Now she lives with her husband and children in a mixed-race neighborhood of wood-frame houses and aging front stoops that looks like the set of an August Wilson play.

Since arriving in Pennsylvania as undocumented immigrants 16 years ago, she and her husband have supported their family with jobs in construction and factories. One of their adult children now holds a white-collar office job. Their mixed-status family includes a college graduate who is a recipient of Deferred Action for Childhood Arrivals, the program that grants temporary status to those who crossed the border as children. The couple recently purchased a home, and their first grandchild, a U.S. citizen, was born a few months ago.

The re-election of Donald Trump would have preserved a status quo in which all their American accomplishments could be wiped out at any moment. And yet, Joe Biden’s narrow victory and the Republicans’ unexpectedly strong showing in congressional races might leave much of that status quo intact.

When my family friend’s mother died recently, in Guatemala City, the friend attended the funeral services via a telephone video from Pennsylvania, since leaving the country puts her at risk of being permanently separated from her children. The family’s DACA recipient has permission to work in this country, but remains, in the eyes of the law, an undocumented immigrant. The Trump administration worked to dismantle DACA, and there is no guarantee the incoming Congress will move to rescue it. They all live with the fear that something as simple as a traffic stop could cause them to be deported.

The labor of undocumented workers sustains this country. During the pandemic, they perform essential tasks in hospitals, farm fields, grocery stores and other places. They feed this country, clean our homes and help raise our children. Their daily anxieties and their frustrations are a central element in the emotional landscape of this country.

Thirteen years have passed since the failed efforts to legislate comprehensive immigration reform during the administration of George W. Bush. Many members of the “dreamer” generation are now in their mid-30s. And there is an older generation of undocumented immigrants — people who arrived here as adults in the 1990s — now approaching retirement age. I recently met an elected official whose aging parents, longtime farmworkers in the Pacific Northwest, are undocumented.

We are slowly creating a caste of permanently undocumented Latino people in the United States. Politicians like Mitch McConnell helped kill immigration reform efforts when Barack Obama was president. He was also an ally of the Trump administration as it used immigrants as props in a theater of cruelty, from the Muslim ban to the attempt to kill DACA that reached the Supreme Court this spring.

During the Trump presidency, various federal agencies have taken more than 400 executive actions that restrict immigration and punish immigrants. Mr. Trump and his team took special delight in tormenting the undocumented because doing so made the otherwise feckless president look macho. That’s how we arrived at Jeff Sessions infamously declaring, “We need to take away children.” It’s likely that Mr. McConnell will remain the Senate majority leader after Mr. Biden takes office.

History has shown that accepting the existence of widespread, legal forms of inequality can undermine a society from within, undoing its sense of right and wrong. In the early 21st century, the growing caste of permanently undocumented people became a target of right-wing national and local media. Radio shock jocks and television commentators characterized these immigrants as inherently “criminal” people and stoked prejudice against them. This intolerance in turn helped fuel Mr. Trump’s political rise.

I’ve met undocumented business owners and Harvard graduates. For four years, they have endured an endless stream of attacks by Mr. Trump. When the American electorate ousted him from office, it gave them some breathing room and a moment to celebrate. But what will the future hold for them? The answer to this question could determine whether the great democracy founded by American rebels in the 18th century will survive the 21st.

(Héctor Tobar, an associate professor at the University of California, Irvine, is the author, most recently, of “The Last Great Road Bum” and a contributing opinion writer for The New York Times.)