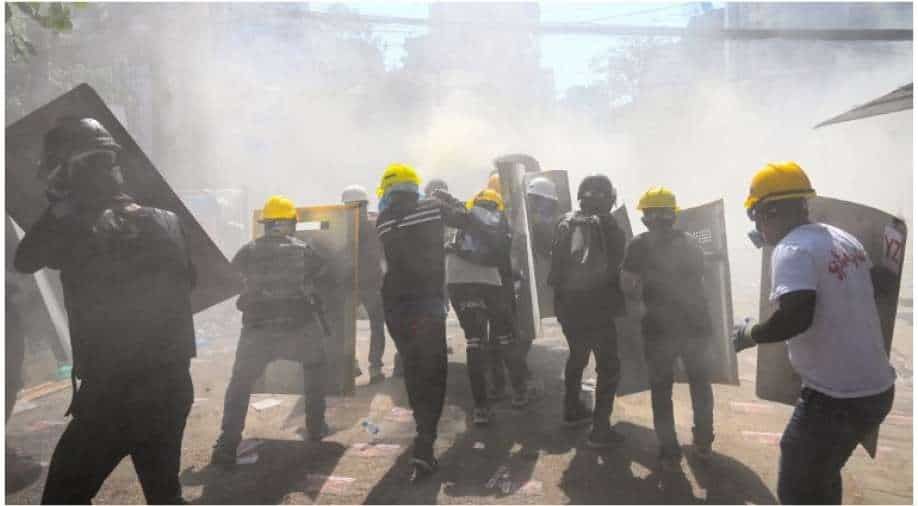 A file photo of protesters reacting after tear gas was fired during a demonstration against the military coup in Yangon.  Photograph:( AFP )

The occurrences in Myanmar, India’s immediate eastern neighbourhood have shaken the whole world in the wake of a military take-over by the junta on Feb 1, promulgating an emergency for the next one year and more significantly, putting popular pro-democracy leader Aung San Suu Kyi behind bars. The country is up in flames. So far more than 50 have been killed. Well over 1700 have been arrested, and a violent showdown between the protesters and heavily armed security forces has become more a routine than an exception. Reports of confrontation between the military and the agitators seeking return of democracy and release of Aung San Suu Kyi in Yangon, Mandalay and other places are trickling on a regular basis.

The scene looks perilous. The villain behind crushing the democratic future of Myanmar and causing a Coup d’etat is 64-year-old General Min Aung Hlaing who has been functioning as the army chief of Myanmar since 2011. Known for his ruthless response against any civilian uprising, Gen Hlaing, a law graduate himself, came to adverse light in 2009 when as a “battle-hardened warrior” of the Myanmar military, he ruthlessly launched a military offensive in Kokang region crushing the Myanmar Nationalities Democratic Alliance.

This infamous General is also singularly responsible for the brutal crackdown on the Rohingyas in 2017 resulting in the influx of nearly 7 million of them into Bangladesh in the last over three years, the number has exceeded 10 million. This shows his heartlessness and resolve to sabotage any chances of democracy trying to find a space in the political landscape of Myanmar.

Meanwhile, the ongoing political turbulence and incessant crackdown on the defiant protesters have drawn acerbic criticism from the UN. UN Human Rights Chief, Michelle Rachelet, in a recent statement, called upon the military to stop forthwith the vicious repression and killings of the innocents.

ASEAN calls for an end to perpetration of excesses have also fallen on deaf ears like the appeals from the UN. There have been more than visible protest demonstrations in front of the Indonesian and Thai Embassies in Myanmar that have not resulted in any impact except stirring an increasing public opinion against the military.

Public is surely in a defiant mood.

Slogans and placards are carrying banner headlines that say “Stone Age is over”.  They are also ranting that the protesters are no longer afraid of any threat from the military. The cities in Myanmar are dotted with barricades and fortifications, never seen before of this scale. The country, since its independence, has seen five military takeovers dating from 1948 but the resistance put up this time seems unprecedented. Several “people’s governing bodies” have been formed which pose a direct challenge to the military leadership.

Their resorting to lobbing of stun grenades and firing of live ammunition have also been proving ineffective. Foreign Minister of Singapore, Vivian Balakrishnan on March 5 has described in the Parliament, the happenings in Myanmar as national shame including the armed forces' use of weapons against its own people.

Amid these happenings, credible reports suggest that the military leadership in Myanmar has tried to withdraw one billion US dollars from Federal Reserve after seizing power on Feb 1. The US has put a freeze on the transaction.  It’s further known now that the Central Bank of Myanmar had tried to siphon off the money from the US. The US is trying to ascertain the names of those involved in this attempt to withdraw money as the US, the UK, EU and Canada have imposed fresh sanctions on Myanmar.

At the same time, however, there seems to be a concerted disinformation campaign unleashed by the military as seen from disclosure by an ex-Israeli military intelligence officer who is also a Canadian citizen. Ari Ben Menashe, who claims to have intervened in military regimes of Sudan and other conflict zones, said that he has been hired by the Myanmar military to do some damage control lest its image is tarnished in the eyes of the US and other western countries. Menashe’s firm is known as Dickens & Madsons.

Canada hinted that Myanmar military leadership is trying to distance itself from China so that it’s not seen as a Chinese puppet. This looks surprising and couldn’t be independently verified at this juncture. Menashe further claimed that Myanmar is trying to take back Rohingya refugees from Bangladesh and its using diplomatic channels in Saudi Arabia and the UAE for their early return. This again appears intriguing yet it needs close monitoring.

Meanwhile, inputs as of March 7 reveal that there were sporadic incidents of violence during clashes between the security forces in different parts of Myanmar with protesters intensifying their tirade against the military regime. There have been raids in the houses of hundreds of protesters and one activist of the National League for Democracy (NLD), Khin Maung Latt died in military custody allegedly after he was tortured. A northern Shan State city Lashio saw a barrage of police firing, stun grenades and tear-gassing that injured many.

There is an uneasy calm prevailing in many parts of Myanmar. As regards to India, its borders with Myanmar need to be extra vigilant to prevent unauthorised entry of the victims of the military. A section of the Myanmar military is believed to have told the Indian authorities to return many Myanmar policemen who are thought to have crossed over to the Indian side in the state of Mizoram to escape the military onslaught.

As things unfold dramatically in Myanmar with the rising military oppression and the anti-coup protestors stepping up their aggressive opposition, a longish stand-off between the military-led government and the pro-democracy forces looks certain in the near foreseeable future.

India, diplomatically, has so far played its card with dexterity and patience at the same time eyeing the situation closely to act and react as the ground situation demands.