Ode to Russian Nikolai Gogol, the bizarre and beautiful literary master who died on this day in 1852 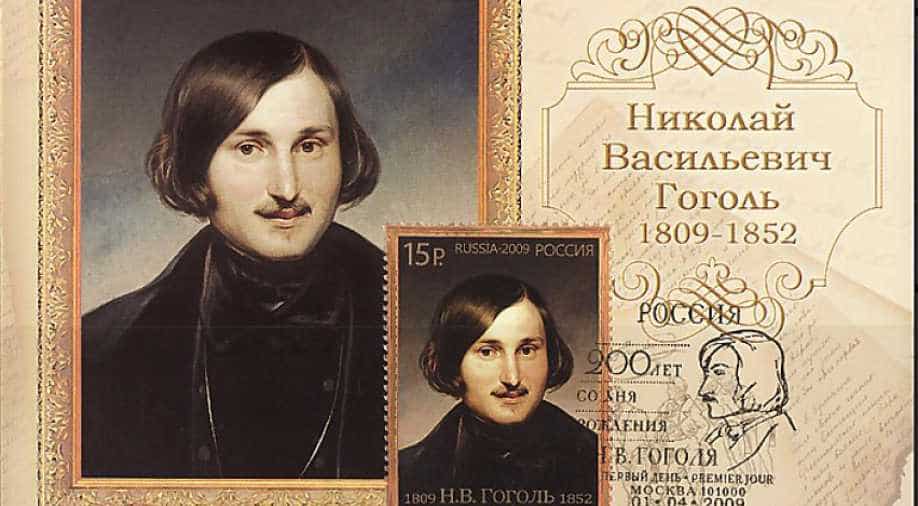 Maximum card to the 200th anniversary of the birth of Nikolai Gogol. On postal card and stamp: Portrait of Nikolai Gogol by F Moller, 1840s. The State Tretyakov Gallery. Photo source: Wikimedia via Andrey Korzun. Photograph:( Others )

Nikolai Gogol was a weird, complex writer. Early on, he wrote short stories about the countryside that Russians still read in school today. I haven't bothered reading these because Vladimir Nabokov, who dearly loved Gogol's writing, said they're terrible. The Russian-reading seller at one of the Toronto book stores I cherish agrees with Nabokov, so I stuck to his later short stories, many of them major masterpieces, and the first part of his immortal novel, Dead Souls.

Dead Souls is filled with comedy, but the laughs have the unfortunate side effect of distracting readers from the novel's hidden depths. It is a scathing review of human kind. Gogol's writing contains some of the Antisemitism typical of his time and place, and he had misanthropic tendencies to blast as stupid, crude and unevolved basically the entire world. But his gift is the rare ability to capture in his writing a concept that is only identified by the Russian word, poshlost. Understanding this term is essential to understanding Gogol.

This poshlost excerpt is from an essay Nabokov wrote, which itself overlaps with the book he wrote on Gogol called, fittingly, Nikolai Gogol. The chapter on Dead Souls unpacks the shimmering and radiant poshlost of the protagonist, Mr Chichikov.

What is Dead Souls actually about?

Chichikov arrives in a minor Russian village to run a scam, but nobody knows that's what he's there to do. He goes around saying whatever is needed to charm whoever he's currently speaking to, meanwhile learning about them, what they possess, and how he can obtain from them what he wants.

Chichikov's goal is to buy people's dead serfs, also known then as "souls". Bureaucratically speaking, a serf who had died in real life but wasn't yet registered in the census as dead was still alive as far as the state was concerned. Chichikov goes around town acquiring such dead-but-alive people. The sellers are confused! Why does this man want to pay real money for people no longer alive? The owners of the dead serfs pay taxes until they officially register the dead as dead, but still, their various vices makes them reluctant to pay. Ultimately each negotiation is a dance between the devil, Chichikov, and a lesser and petty provincial devil. Through Chichikov's interactions, which are really negotiations, Gogol lambaste's humanity with more richness, variety, and vigour than any writer I've come across. It's hilarious, not without a moral foundation, but the main thing is feeling the esoteric strangeness of the author that can't quite be put into words except by him.

The plot is brilliant, yet is not the main feature of the novel. The story itself is a framework through which poshlost is to be exposed and expanded. Revelling in the discrepancy between the character's surface actions and their real motivations, and the interplay between various types of clashing vulgarity posing as if they're dignified, is somehow life-affirming, hilarious, and no other writer I have encountered lays human kind's follies so bare.

The question still remains, why does Chichikov want to buy the rights to dead people? Because he's running a get-rich-quick scam! His plan is to take out an enormous loan against the dead people, who the bank will think are still alive. Except a rumour breaks out among the bumbling country people that, somehow, Chichikov is either Napoleon or a local one-legged bandit (Chichikov has two legs!) and, for good measure, intends to elope with the mayor's daughter. The various follies of the townspeople somehow accumulate, expand, and take on a life of their own, becoming this nonsensical rumour. So the book ends with Chichikov fleeing town, just like his creator: Gogol had a habit of fleeing to Rome after publishing in Russia.

Socially-minded critics were apt to attribute to Chichikov and the characters he meets all the vices of Russian. These critics are all wrong. Gogol's unique absurdity is intrinsically his, it's not a reflection of the outer world. Plyushkin, Sobochka, Nozydryov, Manilov and the rest all come from Gogol's imagination, and are more incarnations of a certain kind of universal poshlost than the embodiment of some contemporary country bumpkin.

My understanding is admittedly limited since, tragically, I cannot read the original Russian text. But Nabokov and Henri Troyat and many others reach this conclusion, and it's the interpretation I favour. If people enjoy Gogol despite interpreting his literature in a way I consider wrong, well, there are worse sins in the world.

Dead Souls was originally meant to be a three-part epic poem. The first part echoes Homer, and the novel's roundness and its voyage through hellscapes has some Dante, too.  But Gogol died in the middle of writing the second part, and the text ends abruptly.

Typical of Gogol, he wrote the novel, then decided what it was about--the first part was meant to be devilish, and would be redeemed by the next books. Except Gogol, who was a Christian, believed way more strongly in the Devil than in God. His writing is really only alive when inspired by Satan. God stifled and infected his writing because it wasn't natural to him.

Decades later, there wasn't room in Russia for both God and Tolstoy, so the Russian Orthodox Church excommunicated Tolstoy, who took many followers along, but died alone in a train station. If this is poetically fitting for the literary giant who by the end became world famous as an ascetic saint to people who hadn't read his tomes, Gogol, that strange strange devil who wrote "The Nose", died in Moscow while some monstrous doctor drained Gogol's enormous nose of blood with leeches while the great author, hands tied to the bedposts, screamed in protest.