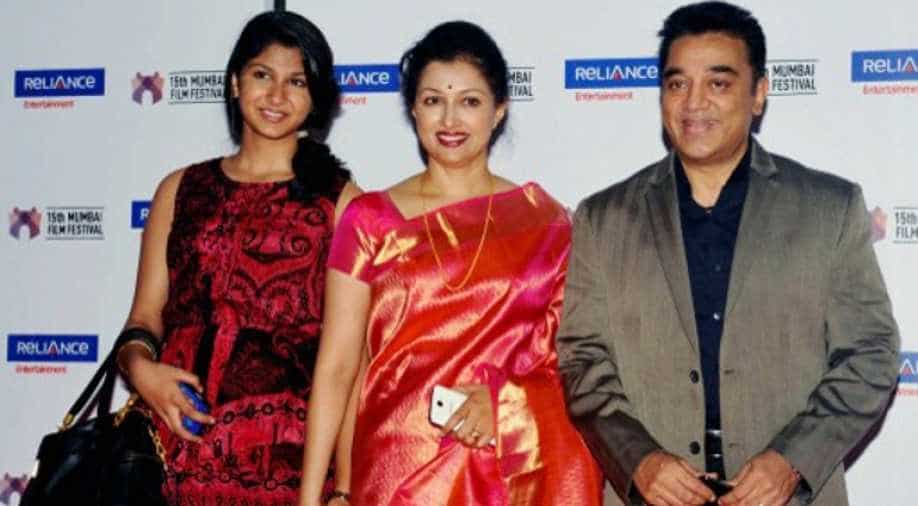 In one of the most high profile splits in Tamil cinema, actress Gautami Tadimalla today announced she was separating from veteran star Kamal Haasan, terming it as "one of the most devastating decisions that I have ever had to make in my life."

"It is heartbreaking for me to have to say today that I and Mr Haasan are no longer together. After almost 13 years together, it has been one of the most devastating decisions that I have ever had to make in my life," she wrote in a blog whose link she later posted on her Twitter page.

Gautami, who starred opposite Haasan in films like "Aboorva Sagotharargal", "Thevar Magan" and the recent "Papanasam", said it was not an easy decision for her.

A cancer survivor, the actress said, "It is never easy for anyone in a committed relationship to realise that their paths have irreversibly diverged and that the only choices in front of them are to either compromise with their dreams for life or to accept the truth of their solitude and move ahead.

"It has taken me a very long time, a couple of years at the very least, to accept this heartbreaking truth and come to this decision."

The 48-year-old actress said it was not her intention to seek sympathy or assign blame.

"Not all of these changes might be what we expect or anticipate but that does not, in any way, negate the very real impact of these diverging priorities in a relationship," she said.

"This decision to set forth on my own at this stage in my life is perhaps one of the most difficult decisions any woman will ever have to make but it is a necessary one for me. For I am a mother first and foremost and I have a responsibility to my child to be the best mother that I can be. And to do that, it is essential that I am at peace within myself."

The news of separation comes almost three months after it was reported that Haasan's actress daughter Shruti and Gautami had a showdown during the making of their latest film "Sabaash Naidu".

There were reports that Shruti wasn't happy with Gautami's choice of clothes for her character in the movie and brought in her own outfits. The film will see the actress share screen space with her father for the first time. Shruti, however, had debunked the reports.