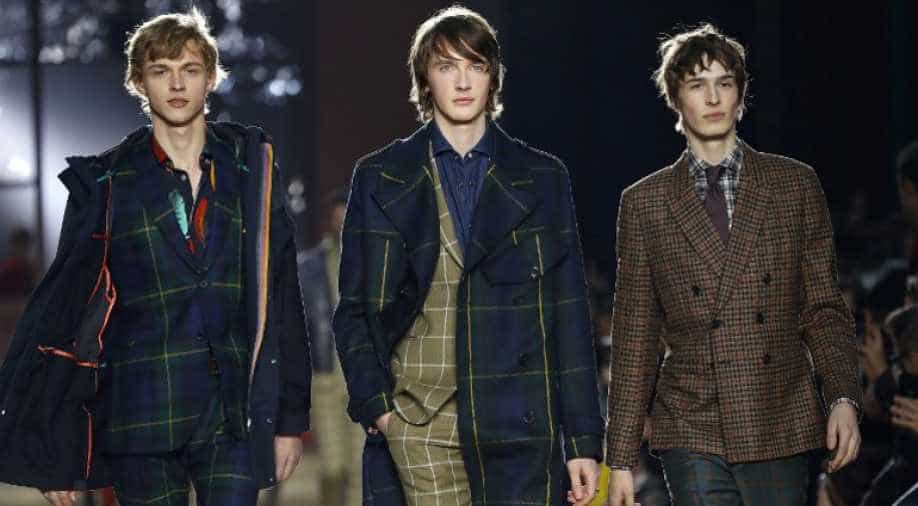 With Paris men's fashion week coming to an end Sunday night, we pick out five of the big trends in the autumn-winter collections:

Youth may be wasted on the young, as Oscar Wilde once quipped, but style isn't, insisted the Paris shows, which went all-out to capture the hearts of millennials.

Rarely have the catwalks been so focused on teens and twenty-somethings.

The hoodie conquered all and skate kid chic was everywhere, with Japanese brand Facetasm going so far as to send its models out with what appeared to be fake acne.

The slogans that ran through The Etudes, Lanvin and Chinese brand Sankuanz shows were pure teen spirit, "Never mind", "Nothing" and "Destroy".

Dior's Kris Van Assche, whose show was a rallying call for a "new tailoring" aimed at the young, summed up the adolescent fascination.

"I have always been drawn to the moment when boys become men and they are still clinging onto to dreams, desires and freedoms and haven't yet slipped into the straitjacket," he told AFP.

Not since the 1980s heydey of bling branding has fashion had such a fascination with logos.

Like much else these days you can blame/credit Georgian trendsetter Demna Gvasalia and his Vetements collective, who name-checked no less than 54 big brands in its last show.

Gvasalia was up to his old logo banditry tricks in his show for Balenciaga, appropriating Bernie Sander's campaign logo, much to the US Democratic Party senator's amusement.

There was less to smile about at Vuitton, where its collaboration with the super hip US street label Supreme had decidedly mixed reviews, with the New York Times calling it "the fashion version of a murder-suicide".

This was supposed to be men's fashion week, but with so many women also on the catwalk you could be forgiven for thinking otherwise.

Mixed and gender-fluid shows have been a thing for a while, but now it has almost become the rule to have a few women models in men's shows, much to the chagrin of some like Dior's Van Assche who claims men's clothes are losing definition.

Once he builds that wall, maybe President Donald Trump could come over and help restore some male pride. He does after all have his own Trump men's clothing line.

The establishment may be a dirty word politically right now yet fashion can't get enough of its stuffy symbolism.

The colours of burnt gold, rust brown and red are nothing if not upper class, and aristocratic Prince of Wales overcheck tartan turned up in all sorts of unlikely places.

You would think you were at a grouse shoot looking at some of the fabric Paul Smith, Agnes b, Officine Generale, Alexandre Mattiussi, Kolor, Loewe, Berluti and Haider Ackermann put out.

Upper crust dandies abounded, most memorably at Ann Demeulemeester, with pinstripes also figuring strongly even among such cutting edge labels as Christian Dada and Henrik Vibskov.

Overall, however, informality was king -- Paris being far too cool to be casual about anything. There was almost no formal wear at all apart from a handful of red-carpet two pieces at Agnes b and the odd outfit that might do at a stretch at Berluti, Ann Demeulemeester and Wooyoungmi.

Dress suits and evening wear appear to be over, trodden into the ground by the onward march of trainers, which were matched with everything from the couture heights of Dior to Balenciaga's Frankenstein office suits to Vuitton, no longer a synonym for well-heeled where footwear is concerned anyway.