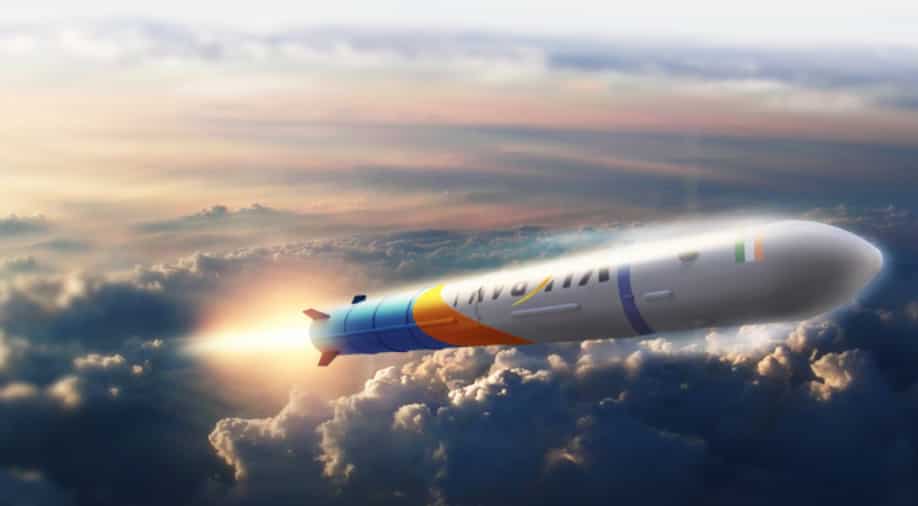 In this file photo, a rocket of the Indian Space Research Organization (ISRO) can be seen Photograph:( WION )

If all goes well, the company is looking forward to a maiden launch by December 2021, with the support and guidance of the Indian Space Research Organization(ISRO).

Skyroot Aerospace, an Indian startup has become the first in the country to test-fire a homegrown upper-stage rocket engine. This is seen as a major milestone in the long-drawn process of building a space faring rocket.

A typical rocket consists of two or more stages, each of which would have its own engines(either single or packed in a cluster). Simply put, a rocket is a combination of multiple engines(stages) that are vertically stacked. While the company has tested the upper-most stage engine, the initial stage engines are being manufactured. If all goes well, the company is looking forward to a maiden launch by December 2021, with the support and guidance of the Indian Space Research Organization(ISRO).

To understand the significance of this test and throw light on the fledgling aerospace startup’s rocket launch plans, WION spoke to team Skyroot

Skyroot: We have planned three rockets - Vikram I,II &III, the name is a tribute to ISRO founder Vikram Sarabhai. The current engine is a meant to be the final stage of the four-stage rocket Vikram I. Vikram I is to be powered by 3 stages of solid-fueled engines and the final stage, which we have currently tested is a liquid-fueled one. We have named this engine Raman, as a tribute to Nobel laureate Sir C.V. Raman. The Raman engine is powered by UDMH and NTO liquid fuels and a cluster of 4 engines would generate 3.4kN thrust.

WION: Any specific reasons on why this particular fuel combination was chosen over the others ?

Skyroot: UDMH and NTO were chosen as they are earth-storable liquids. Using this fuel and our engine we can switch on and off multiple times. The ability to re-start any number of times provides the option of launching multiple satellites in different orbits.

WION: Raman is one engine that goes into the final stage. What about the readiness of the first three stages ?

Skyroot: The first three stage engines are under different stages of manufacturing and we hope to test two of them in about six months time.

WION: What about the intended payload capacity of the three rockets that your team is working on ?

WION: What would be your USP given that ISRO’s latest rocket Small Satellite Launch Vehicle(SSLV) also caters to a similar (sub 500-750kg) payload segment ?

Skyroot: When compared to the SSLV rocket, our vehicle is even smaller. We can only compare vehicles of a similar size category, as the price per Kg of payload becomes cheaper with rockets getting bigger. We can confidently say that in the small vehicles segment, we can offer the best and most competitive prices once we get into mass production. As all our 3 variants get operational, we can also offer a significant reduction in per kg cost.

WION: Testing rocket engines, sourcing components and preparing them for launch requires expensive infrastructure. How are you managing ?

Skyroot: We have some basic facilities of our own and the rest are to be provided by ISRO. In terms of procuring components, there is a reasonably well developed infrastructure in India, thanks to ISRO. We are able to source majority of our components from various vendors and MSMEs within India. As manufacturing costs are relatively low in India, our overall development cost comes down.

WION: ISRO needed over two decades to master their most reliable rocket engine - Vikas. How is a startup able to do the same in lesser time, so much so that a December 2021 launch is envisioned?

Skyroot: Although we started off in 2018, we have had a head-start because there are ISRO veterans helping us, besides Indians who have worked in this field in foreign countries. Basically the scale and thrust of our engines are lesser than the ones being used at ISRO. We have also been trying new technologies such as 3-D printing in fabricating the engines. This has nearly reduced the overall mass by 50%, and reduced total number of components & lead time by 80%.

WION: 3-D printing is majorly used in India for plastics, how do you think this would fare for metals and alloys. Especially in terms of its efficiency in manufacturing rocket-engine components ?

Skyroot: Besides metals we are also using special materials in the 3-D printing process and the Vikram engine has come out as designed and is highly efficient. Though uncommon in India, 3-D printing using metals is widely used in the international market and carious components used for space projects are 3-D printed. We are looking forward to 3-D printing the entire Cryogenic engine to be used in our Vikram-2 rocket.

WION: In terms of vehicle assembly, launch operations and post-launch tracking and telemetry, how would you manage and which facilities would you be using ?

Skyroot: For Launch pad and Mission control we would be making use of ISRO facilities, preferably the new launch pad for SSLV that is coming up. But that depends on the timeline of when the pad will be ready and when our rocket will be ready. It is upto ISRO to determine the cost that would be incurred for providing us these facilities for launch, currently ISRO charges us a nominal amount for the testing that our equipment undergoes.

WION: Testing and Launch operations are very costly and involve expensive infrastructure. How would liabilities be covered in case of mishaps and what about the quantum of damages that would be sought (if any) ?

Skyroot: Given that insurance is available for all these components and processes, of course liabilities are going to be covered by insurance. But even otherwise, prior to every single test there is a board of approval that does several check before granting permission. After the board grants the go-ahead, then any test has a fair chance. Of course, in case of damage there will be payments that one party would have to make to the other and insurance would also be covering a portion. We look forward In-SPACe playing a key role in making Insurance (if/when needed) accessible at affordable premiums for the NewSpace startups.

WION: How are things looking on the funding side ? Your ambitious goals require copious bankrolling. Are people willing to invest given the post-Covid economic scenario ?

Skyroot: We have received an initial funding of Rs.31.5cr and are expecting to receive Rs.90cr over the next one year. There are big names that wish to invest in space technology and we are confident about it.

WION: How is In-SPACe (Govt of India) supporting your activity ? Is the 18% GST incurred by an Indian satellite company to launch on a private Indian rocket a hinderance ? Will satellite makers not go abroad and launch?

Skyroot: In-SPACe is intended to offer single-window clearance for testing, launching, licensing and other aspects. We hope it will enable us to use the facilities. The 18% GST applies for any domestic service transaction irrespective of industry. A major pain point for NewSpace startups is the incurred 18% additional “upfront” cost which will locked up in GST credits. The company can only make use of GST credits only once we start making sizable revenues.

This problem applies to even developmental costs incurred .For example, Several crores of developmental/procurement costs we incur till we operationalize commercially, bears the brunt of GST. Ideally, capital-intensive hardware/Space startups like us should be given GST incentive in pre-revenue phases.

WION: Rocket science involves people from all scientific disciplines, tell us about the people in your team and the disciplines they cover.

Skyroot: CEO -Pawan Kumar Chandana and COO - Naga Bharath Daka are Post graduates from IIT and had worked with ISRO on rocket mechanical systems and flight computer, avionics respectively. Currently we are a team of 40 and the fields of expertise are- Electronics, propulsion, guidance, navigation, control, structure etc. But we do outsource quite a bit of our work and that would mean that we have over 100 people working for us in all. But as we near launch, we’d certainly grow bigger as a team.

WION: Can we expect your proposed maiden launch by December 2021 to carry a dummy payload or live satellite(s)?

Skyroot: Depending on demand, that is something we’ll decide about 6 months prior to launch.