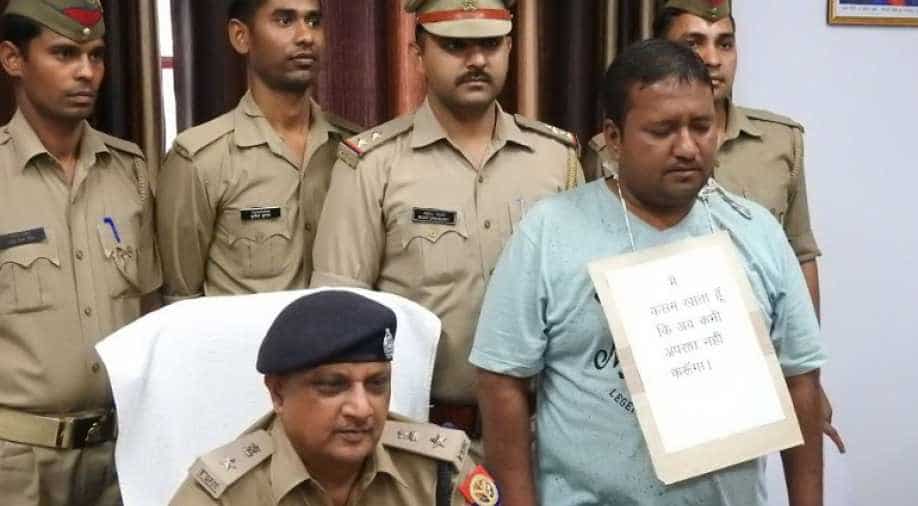 Fearing for his life due to the rising number of police encounters in Uttar Pradesh, a wanted criminal carrying a reward of Rs 12,000 on his head surrendered before the police on Thursday.

Faizan Ahmad alias Khanna, a resident of a village in UP's Sambhal district surrendered before the police wearing a placard around his neck saying, "Don’t shoot me. I swear never to commit crime again.''

Ahmad said he had worn the placard as he was scared that he might be shot dead by the police.

Ahmad first spoke to the media and told them that he wanted to surrender before the police. Later he reached the Amroha SP’s office and met Additional Superintendent of Police (ASP) Brijesh Singh and informed him about his resolve

He also sought forgiveness and pledged that he would never commit any crime again. He added that he wanted to spend the rest of his life in jail.

Ahmad was taken into custody and sent to jail.

He has been on the run since 2014 and was wanted in several cases including attempted murder and robbery.

There have been over 1,000 encounters in UP since Yogi Adityanath came to power, with some 50 suspected criminals being killed in them.