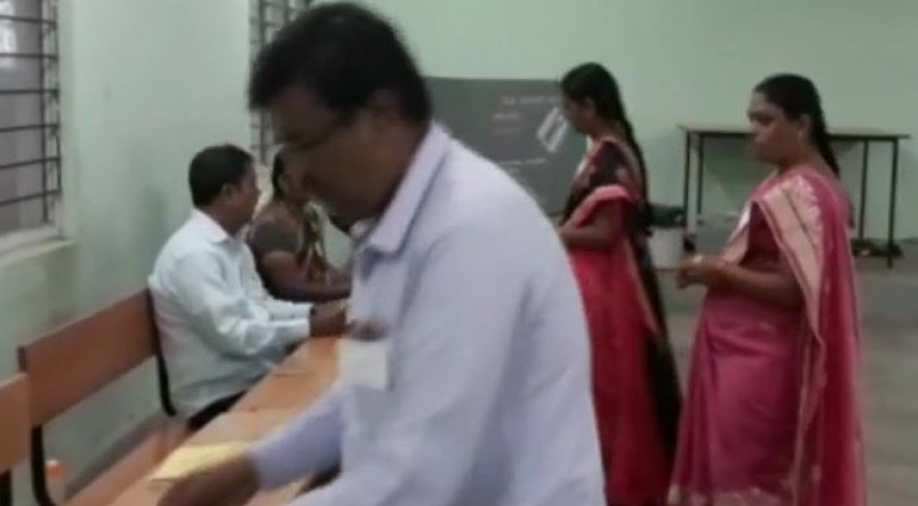 Bypolls to Shivamogga, Mandya, and Ramanagara Lok Sabha seats, and Ballari and Jamkhandi assembly segments began at 7 am and will go on till 6 pm.

Voting for the by-polls to the three Lok Sabha and two assembly constituencies in Karnataka began on Saturday, which is seen as a litmus test for the ruling Congress-JDS coalition.

Bypolls to Shivamogga, Mandya, and Ramanagara Lok Sabha seats, and Ballari and Jamkhandi assembly segments began at 7 am and will go on till 6 pm.

There are a total 31 candidates in the fray in all the five constituencies, though the contest is mainly between the Congress-JDS combine and the BJP.

Counting of votes will be on Tuesday.

Officials at the state chief electoral officer's office said a total of 1,502 polling stations had been declared as sensitive.

More than 35,000 polling personnel will be on duty for the bypolls, in which 8,922 voter-verifiable paper audit trail (VVPAT) machines will be used, they added.

Senior police officials said elaborate security arrangements had been made in all the five constituencies.

The Congress and the Janata Dal (Secular), who came together in a post-poll alliance after the assembly elections in May threw up a hung House, have decided to fight the polls unitedly against the Bharatiya Janata Party.

While the Congress has fielded its candidates in Jamkhandi and Ballari, the JDS is contesting in Shivamogga, Ramanagara, and Mandya under an electoral understanding.

The outcome of the by-elections is expected to have a bearing on the alliance between the two ruling parties for the parliamentary polls and also be a factor in determining the respective bargaining power.

The BJP, which has been questioning the longevity of the coalition government, has predicted its fall once the bypoll results are out.

Among the prominent candidates in the fray is Chief Minister H D Kumaraswamy's wife, Anita Kumaraswamy, who is expected to have a smooth sail in Ramanagara after BJP nominee L Chandrashekhar withdrew from the contest and rejoined the Congress.

The BJP had lodged a complaint with the Election Commission about the developments in Ramanagara and requested it to "annul" the elections immediately.

The bypolls brought to fore family politics with kin of several leaders being fielded.

In Shivamogga, state BJP chief B S Yeddyurappa's son, B Y Raghavendra, is testing his fortunes against another former chief minister S Bangarappa's son, Madhu Bangarappa, of the JDS.

101% my son (BS Raghavendra) is going to win the Shimoga seat. We are also going to win Bellary & Jamkhandi. We will get absolute majority in all the constituencies: Former Karnataka CM BS Yeddyurappa pic.twitter.com/XW6YQN9xwt

In the Vokkaliga bastion of Mandya, JDS' Shivarame Gowda, is pitted against a fresh face in Dr Siddaramaiah, a retired Commercial Tax officer from the BJP.

The announcement of the bypolls for the Lok Sabha seats came as a surprise to all the three major political parties in the state -- Congress, BJP and JD(S) -- who questioned the need for the exercise when the general elections are due early next year.

The by-elections have been necessitated after Yeddyurappa (Shivamogga) and Sriramalu (Ballari), and C S Puttaraju of the JDS (Mandya) resigned as MPs on their election to the assembly in May this year.

Bypolls to Jamkhandi assembly seat was caused by the death of Congress MLA Siddu Nyamagouda, while Ramanagara fell vacant after Kumaraswamy gave up the seat preferring Chennapatna, the other constituency from where he had won.