S400 missile deal with Russia dominates Mattis-Sitharaman talks in US 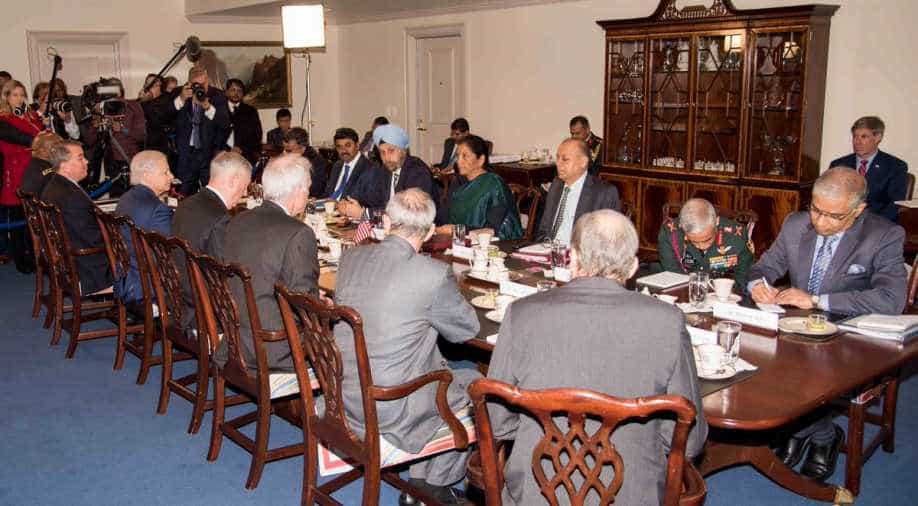 Mattis appreciated India's leadership as a ''stabilising force" in pursuit of promoting peace and security across the region and the globe. Photograph:( Twitter )

Sitharaman while "acknowledging the warmth shown" during her visit, complimented the US for "responsiveness to India's sensitivities."

Evading a direct answer to a question on whether India will get wavier under the Countering America's Adversaries Through Sanctions Act (CAATSA) for the S400 missile deal with Russia, US Defence secretary Jim Mattis said that he and his Indian counterpart  Nirmala Sitharaman will sort out all the issues.

Sitharaman is on a visit to the US. Earlier, in a meeting with his Indian counterpart at the Pentagon, Mattis appreciated India's leadership as a ''stabilising force" in pursuit of promoting peace and security across the region and the globe.

"India has spent many, many years in its non-aligned status. It's drawn a lot of weapons from Russia," he further said.

Prior to her meeting with Mattis, the Indian defence minister was received by US Secretary of State and was accorded the Armed Forces Enhanced Honours Cordon welcome.

Sitharaman while "acknowledging the warmth shown" during her visit, complimented the US for "responsiveness to India's sensitivities."

The duo reviewed ongoing initiatives to further strengthen bilateral defence cooperation, as a key pillar of the strategic partnership between India and USA

India has longstanding and wide-ranging cooperation with Russia in the field of defence.

During the 17th India Russia Annual Summit in Delhi, the two sides concluded agreements on the supply of S-400 air defence systems. Along with it India, Russia also agreed on the construction of frigates under Project 1135.6 and shareholders agreement on the formation of joint venture to manufacture Ka-226T helicopters in India. But even as India has tradition ties with Moscow, it is also forging ties with the US.

Lauding the ''growing mutual trust and confidence in our defence partnership" Sitharaman said, a strong foundation has been made for the India-US defence relations over the years. The Minister highlighted the steps taken by the Government of India to promote defence sector manufacturing under "Make in India" flag-ship programme.

The visit by Indian Defence minister comes months after the inaugural 2+2 Ministerial Dialogue in New Delhi. Earlier Defence Minister visited the US Department of State, where she signed the condolence book for former US President George HW Bush. She also paid respects at the 'Tomb of the Unknown Soldier' by placing a wreath at the Arlington National Cemetery Memorial.

Following her engagements in Washington DC, Defence Minister will be visiting Reno on 4 December, where she will hold interactions with select leaders of the Indian community in the US. Later, she will visit San Francisco where she would address a roundtable meeting at Stanford.

She will also visit the Defence Innovation unit of the US Department of Defence and interact with start-ups and venture capitalists associated with this Unit.

From 5-7 December, she will visit Honolulu, which is the headquarters of the US Pacific Command (PACOM), recently renamed as INDO-PACOM.

During her visit, she will also hold meetings with Commander of INDO-PACOM, Admiral Philip S. Davidson.

She will also visit Joint Base Pearl Harbour Hickam, where she would board a US Guided Missile Destroyer and will be briefed on INDO-PACOM activities.