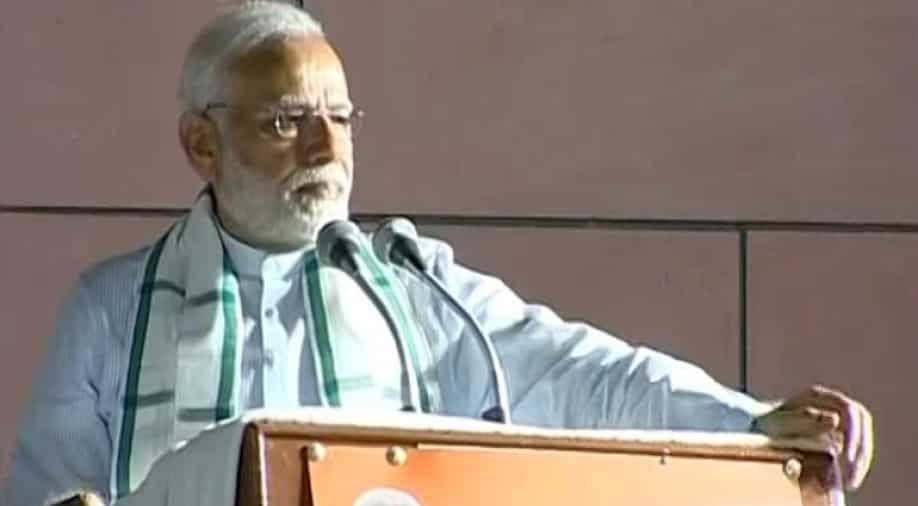 PM Narendra Modi on Tuesday congratulated the workers on the party’s success in Karnataka election.

He also expressed grief over the loss of lives in Varanasi, after a portion of an under-construction flyover collapsed this evening.

“I am happy about Karnataka’s victory but on the other hand, I am saddened by the loss of lives in Varanasi. I extend my condolences to the families of the deceased and assure that the government will do whatever it can to support these families,” he said.

PM Modi said: "They say BJP is a party of Hindi speaking states. Are Goa, Gujarat, Maharashtra states in North East Hindi speaking states? No, BJP represents India. There was no barrier between people of Karnataka & me. I’ll always cherish the affection I received from them."

PM Modi speaking at the BJP headquarters slammed the Mamata government over the West Bengal Panchayat violence calling it a ‘murder of democracy’. He said people were bullied and weren't even allowed to file nominations.

He said: “There is one more thing I want to talk about...the scenes from the Panchayat Elections in West Bengal. It was nothing but a murder of democracy. From the nomination stage to the day of polling, where was the spirit of democracy? People were bullied.”

He added: “People were disallowed to file nominations also. It is not only BJP people who suffered. People from all the leading parties except the one that rules Bengal suffered. This is serious. A land as great as West Bengal has to see such sights, it is unfortunate. It is not about who wins polls....all those who are democratic-minded, including friends in civil society, they must come together to strengthen the democratic spirit. We cannot see things only in partisan terms.”