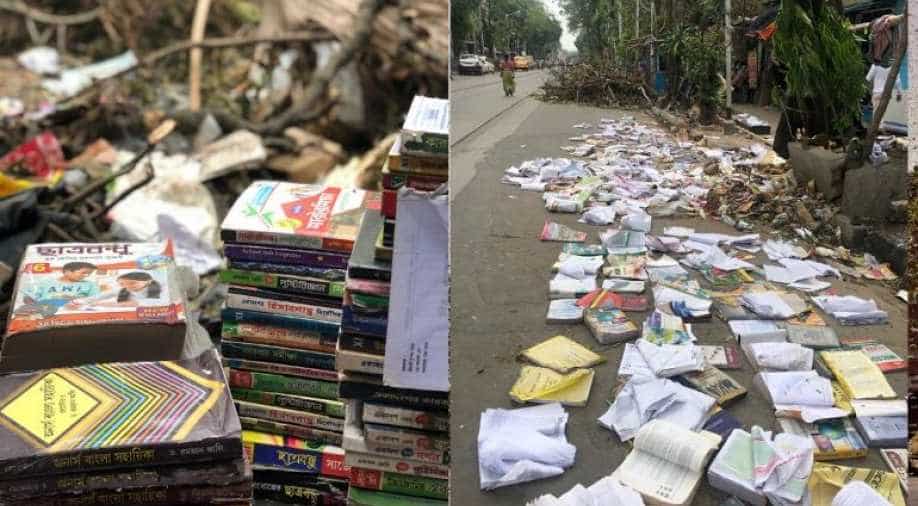 The booksellers who are left in the lurch are now requesting the state government to help them financially recover from the losses.

India’s one of the largest book markets - College Street in Kolkata opens today only to witness the trail of devastation left behind Cyclone Amphan.

But, nature’s fury has hit the booksellers of College Street hard. The booksellers had been suffering massive losses due to the lockdown in the last two months. Now, just days before the Bengal government allowed them to open shops, they were hit by the Cyclone Amphan.

For Suren Banik, who set up his shop in 1971, he has neither seen such devastation nor had he anticipated the same. Today, when Banik reached his shop he saw books strewn on the road.

“I have never seen such devastation in my life. I have been selling books here for more than 50 years. The winds were so strong that books flew out of my shop. All the books that you see now on the road belong to me and the adjacent book store. The books are completely ravaged. We can’t sell them anymore. I have suffered losses to the tune of Rs.50,000. It will take at least two years for me to turn around this present situation,” said Banik.

On last Wednesday, when Cyclone Amphan hit the coast of West Bengal, it left behind a trail of devastation and deaths across the state. As many as 86 people lost their lives in Cyclone Amphan.

Since the transport services were not available in the city, the booksellers could not reach the shops to either take away their stock or take any precautionary measures to protect their shops.

A day after when they reached the shops, they saw books floating in a pool of water caused by the heavy rains due to the cyclone.

For Moloy Guha, the losses are even more. The Cyclone Amphan not just washed away major stock of his books but also left his shop damaged.

“A tree fell on my shop. The roof of the shop has been completely damaged. My book stock which was kept on the lower shelf has been destroyed. I have to now get my shop repaired today as the roof has been damaged due to an uprooted tree falling on my shop,” said Guha.

The booksellers who are left in the lurch are now requesting the state government to help them financially recover from the losses.

According to popular beliefs, one will always find a book of its choice at College Street. Located next to the iconic Indian Coffee House, people of Bengal take great pride in the city’s one of the prized possession - College Street.