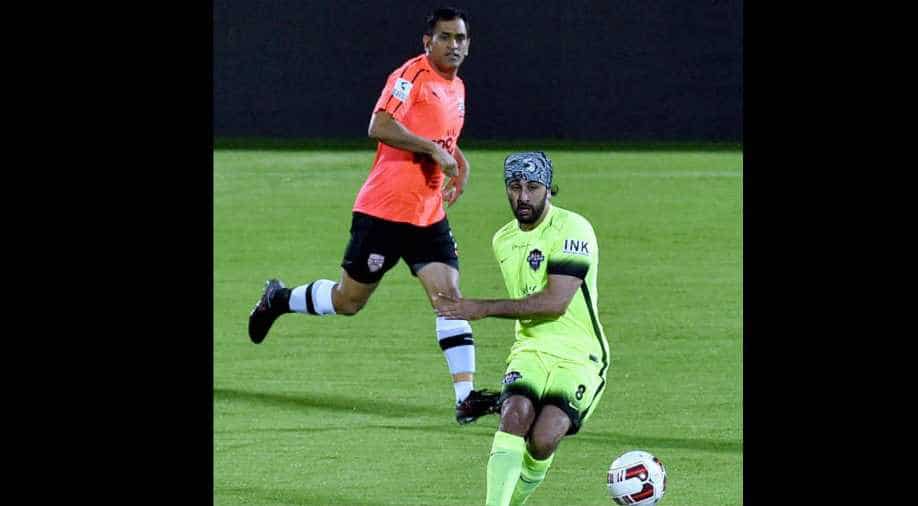 MS Dhoni and Ranbir Kapoor in action during the charity football match in Mumbai on Sunday. Photograph:( PTI )

The match was held between Virat Kohli-led All Hearts side and Abhishek Bachchan's All Stars team||Kohli?s side won 7-3

A charity football match has turned into one of the most talked about event on the Internet. The reason -Mahendra Singh Dhoni’s David Beckham-style goal at the event.

The match was held between Virat Kohli-led All Hearts side and Abhishek Bachchan's All Stars team. Kohli’s side won 7-3 but Dhoni’s football skills left the sizeable crowd gathered at the Andheri Sports Complex ecstatic. It was a free kick to which the filmstars' goalkeeper Mark Robinson had no answer.

Watch the goal that has made Internet go crazy:

Here are some of the reactions from Dhoni’s fans on Twitter:

MS Dhoni was very calm after scoring the goal! Football pitch or Cricket Pitch man is a legend #CelebrityClasico

Legend Dhoni scored 2nd goal of the match. This goal was as good as like a professional footballer #CelebrityClasico2017

#Dhoni can KEEP
can lead
can finish
can bat
can bowl

Dhoni later scored another goal and was fittingly awarded 'Man of the match' while playing for the All Hearts team.

Kohli's fans were also not disappointed as he sprinted down the right flank to score once and then did an impromptu bhangra jig.