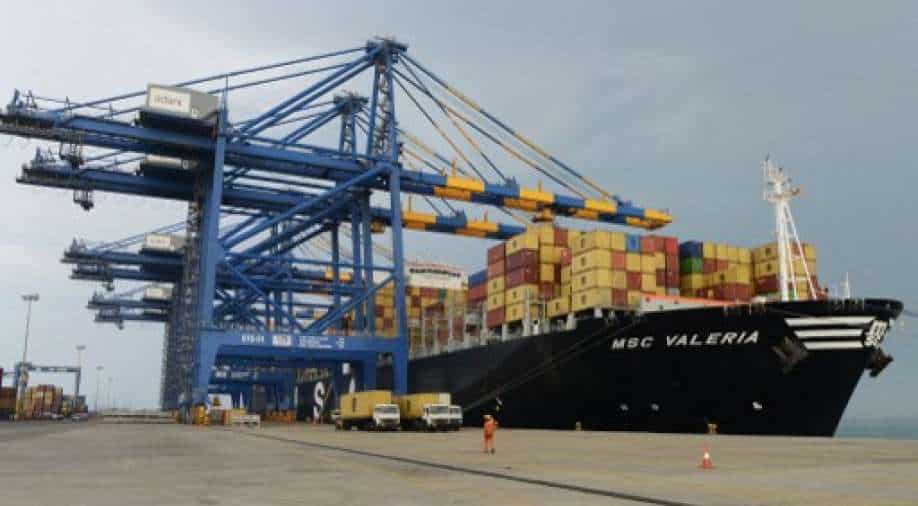 (Image for representation) A general view of Adani Ports and Special Economic Zone at Mundra, some 400 Km from Ahmedabad on June 4, 2013 Photograph:( AFP )

The authorities also suspect the involvement of an Afghan national, whose whereabouts are currently being traced

Two persons were arrested while further search is taking place across India, in connection with the seizure of around 3,000 kgs of heroin, originating from Afghanistan, from a port in India's Gujarat state.

The authorities also suspect the involvement of an Afghan national, whose whereabouts are currently being traced.

According to India’s Directorate of Revenue Intelligence (DRI), the 3,000 kgs drug—valued at $2.7 billion in the international market—was seized from Mundra port. The contraband was mixed with talc stone powder.

The officials acted after receiving “specific intelligence” that the drugs were being shipped from Bandar Abbas Port in Iran via two containers, weighing 40 tonnes.

“Specific intelligence was developed that a consignment imported by M/s Aashi Trading Company, Vijaywada, declared as semi-processed Talc stones originating shipped from Bandar Abbas Port to Mundra Port is suspected to contain narcotics drugs. Intelligence indicated that these drugs have originated from Afghanistan,” the officers said in a statement.

The officers found that the drug was heroin after conducting a laboratory test.

“The examination was conducted in presence of experts from Forensics Science Lab (FSL), Gandhinagar. During the examination, suspected narcotics drugs were recovered from both the containers. The FSL conducted tests and confirmed the presence of heroin,” it added.

The officers are conducting searches in Ahmedabad, Delhi, Chennai, Gandhidham and Mandvi in Gujarat.

The latest haul by the Indian authorities brings back the focus on Afghanistan, from where the seized heroin originated.

Afghanistan is the world’s biggest illicit opiate supplier. The poppy crops—the raw ingredient of opium and its derivative heroin— had played a key role in helping the Taliban fund its insurgency against the Western forces, cementing the country’s longtime position as the world’s leading producer of opium.

The gum harvested from poppies is turned into heroin and then shipped to Central Asia, Europe and the United States— where the demand remains in high.

According to the UNODC, the opium economy in Afghanistan is estimated at $1.2 billion to $2.1 billion annually, accounting for 6 to 11 per cent of the Afghan Gross Domestic Production (GDP).

The UN agency estimates Afghanistan's drug kingpins to account for 80 per cent of global opium and heroin supplies.

Intoxicants including narcotic drugs are, notably, ‘haraam’ in Islam. Yet, the Taliban which claim to fight in the name of religion has refrained from banning opium.

According to an American official quoted in the US Special Inspector General for Afghanistan (SIGAR) report released in May 2021, the militia group derives up to 60 per cent of its annual revenue from the illegal narcotics trade,

An investigation by the BBC found that the Taliban's annual income surged to $400 million from 2011 onwards and is estimated to have peaked at $1.5 billion by 2018-end.

As per UN officials, the Taliban are expected to have earned more than $400 million between 2018 and 2019 from the drug trade, Reuters reported.

However, ever since it took over Afghanistan, the Taliban had been repeatedly stressing that their new government won’t allow the production of narcotics drug.

Speaking at a first press conference on September 12, Taliban spokesman Zabihullah Mujahid promised that the new government would not turn the world's leading producer of opium into a fully-fledged narco-state.

“We are assuring our countrymen and women and the international community, we will not have any narcotics produced," Mujahid told reporters in Kabul.

“From now on, nobody’s going to get involved (in the heroin trade), nobody can be involved in drug smuggling.”