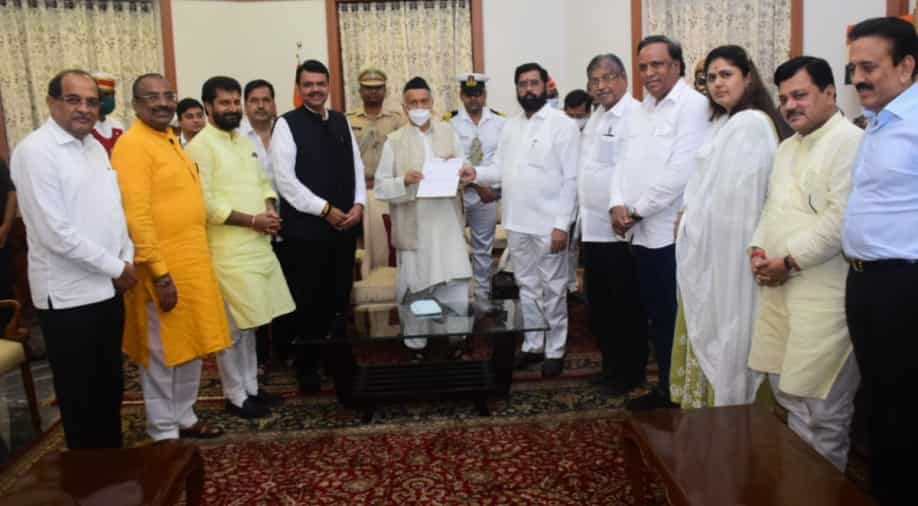 Eknath Shinde to be the Maharashtra Chief Minister. Photograph:( Twitter )

Speaker Nana Patole made the announcement in the House stating that BJP will be the opposition party in the assembly.

BJP leader Devendra Fadnavis and former chief minister of Maharashtra was elected as Leader of Opposition in the Maharashtra Assembly on Sunday.

Speaker Nana Patole made the announcement in the House stating that BJP will be the opposition party in the assembly.

Chief Minister Uddhav Thackeray greeted Fadnavis on his election and said he had learnt a lot from his predecessor. The CM also said that he "won't ever leave the ideology of Hindutva."

"I have learnt a lot of things from Devendra Fadvanis and I will always be friends with him. I am still with the ideology of 'Hindutva' and won't ever leave it. In the past 5 years, I've never betrayed the government," Thackeray said Fadnavis took the seat allocated to the Leader of Opposition soon after his election.

"I welcome Devendra Fadnavis as the Leader of Opposition. We have been together from the past 25 years and I didn't expect this day to come," he said.

The Shiv Sena chief, however, said that the BJP-Shiv Sena spilt would never have happened if the former was good to them.

"I won't call you (Devendra Fadnavis) an 'Opposition leader', but I will call you a 'responsible leader'. If you would have been good to us then, all this (BJP-Shiv Sena split) would have not happened," Thackeray said.

"I am a lucky CM because those who opposed me are now with me and those who I was with are now on the opposite side. I am here with my luck and blessings of people. I have never told anyone that I will be coming here but I came," Thackeray said in an apparent reference to Fadnavis poll campaign slogans 'I will be back'.

NCP leader Jayant Patil also took a jibe at Fadvanis saying, "Fadvanis was right in saying that he will come back but he didn't say he will be sitting on the opposite side."

Earlier today, Congress MLA Nana Patole was elected unopposed as the Speaker of the Assembly after BJP withdrew its candidate for the post.BJP and Shiv Sena alliance collapsed after BJP did not accept the latter's demand for equal power-sharing including rotation of the chief minister's post in the new government.

Sena later stitched an alliance -- Maha Vikas Aghadi -- with the Nationalist Congress Party (NCP) and the Congress to form the new government with Uddhav Thackeray at the helm.