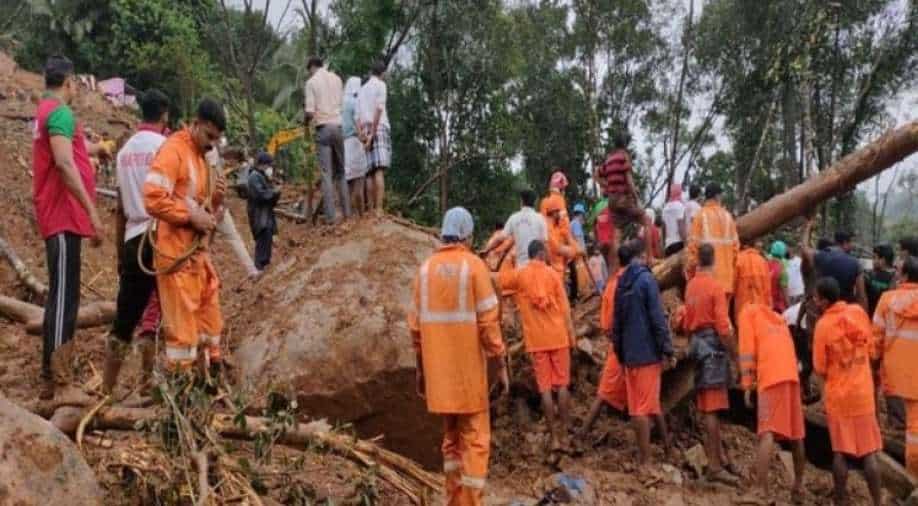 NDRF during a rescue operation at Idduki and Kottayam where landslide occurred. Photograph:( ANI )

Three more bodies were recovered from Koottikkal in Kerala's Kottayam district on Sunday due to landslides triggered by heavy rainfall, which has pushed the death toll in the state to nine, officials said.

State ministers K Rajan, Roshy Augustine and VN Vasavan participated in a review meeting to assess the situation arising due to heavy rains in the state, at Mundakkayam in Kottayam this morning.

In view of the red alert for rainfall and possible flooding and waterlogging in several districts of Kerala, a total of 11 teams of the National Disaster Relief Teams (NDRF) have been deployed to the state in coordination with the Kerala State Disaster Management Authority (KSDMA).

A total of 33 people including eight women and seven children have been rescued so far, according to the NDRF.

Early this morning a team of the NDRF conducted rescue operation in Kokkayar, Idukki where a landslide occurred yesterday.

Rescue operations were also conducted in and around Ernakulam district and in Vaipur, RanniTaluk in Pathanamthitta district.

According to the Met department there will be isolated heavy rain in parts of the state over the next 24 hours starting October 17.

The India Meterological Department today said that the low-pressure area over southeast Arabian Sea and adjoining Kerala has become less marked and there is a possibility of light to moderate rainfall at many places with only isolated heavy rainfall over the state during next 24 hours and further decrease thereafter.

On Saturday, four people were killed in Kottayam district while two casualties have been reported in Idukki district.

Idduki and Kottayam districts in Central and South Kerala bore the brunt of the heavy rains that have been lashing the state since Friday with many people feared missing in landslides. Several people have been injured and displaced in rain-related incidents.