Karnataka hijab row: From dress code to protests, what really is the issue? 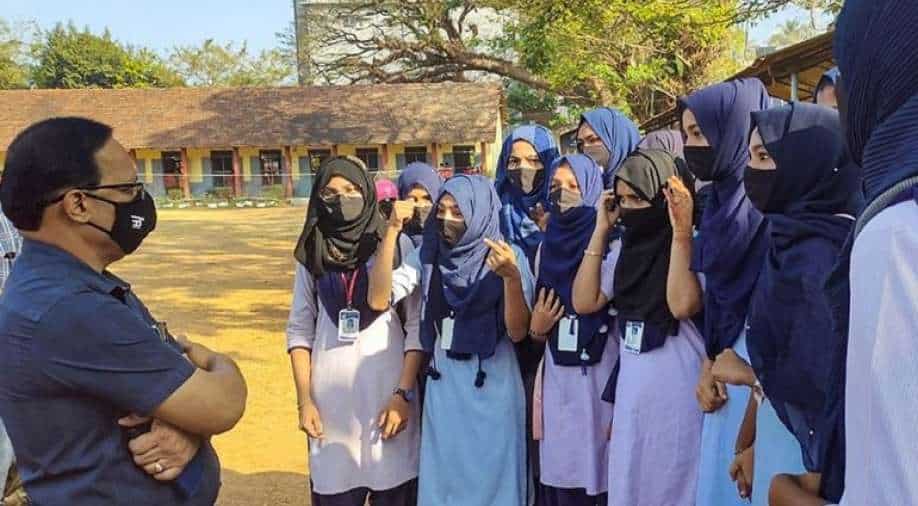 A faculty member talks with the students wearing hijab, after the school authorities denied them entry for wearing a hijab or scarf, in Kundapura of Udupi district. Photograph:( PTI )

Amid the ongoing controversy over wearing hijab to college, Karnataka Chief Minister Basavaraj Bommai on Tuesday has asked all concerned to keep the peace and let children study

The Karnataka High Court on Tuesday is hearing the petitions filed by five girls studying in a college located in the Udupi district. They are questioning the hijab restriction in college.

The issue began in January at a government PU College in Udupi where six students who attended classes wearing headscarves were asked to leave the campus.

The row has now spread to a few other colleges in nearby Kundapur and Byndoor. A group of girls staged a demonstration at Bannimantapa (Mysuru) in favour of the hijab.

Amid the ongoing controversy over wearing hijab to college, Karnataka Chief Minister Basavaraj Bommai on Tuesday has asked all concerned to keep the peace and let children study.

Karnataka CM Basavaraj Bommai orders closure of all high schools and colleges for next three days in the State, amid ongoing hijab row pic.twitter.com/3WErWxztWi

Bommai said, "All the concerned people (in the Udupi hijab row) should keep the peace and let children study. The matter will be presented in High Court today, let`s wait for it."

The state's Home Minister Araga Jnanendra on Tuesday while appealing for peace said no one should give an opportunity to use the police force.

"You (students) are all educated, you have to think about your future. After two years of COVID-19, this year classes have been conducted in a good way. This is the time for you to prepare for your exams that are coming up in a couple of months," Jnanendra said.

Noting that religious forces behind such incidents have to be quelled and everyone should think about the country, the minister in a video statement said, "we should all stand together as brothers, as the children of this country. Uniform is a sign of equality. Educational institutions are not the place for practicing our religion or to showcase our costumes."

"Everyone should maintain peace. Don't give an opportunity to use the police force. I appeal to parents to guide their children and let's all work towards colleges functioning in a peaceful manner," he added.