Kalyan Singh cremated with full state honours, Ram temple approach road to be named after him 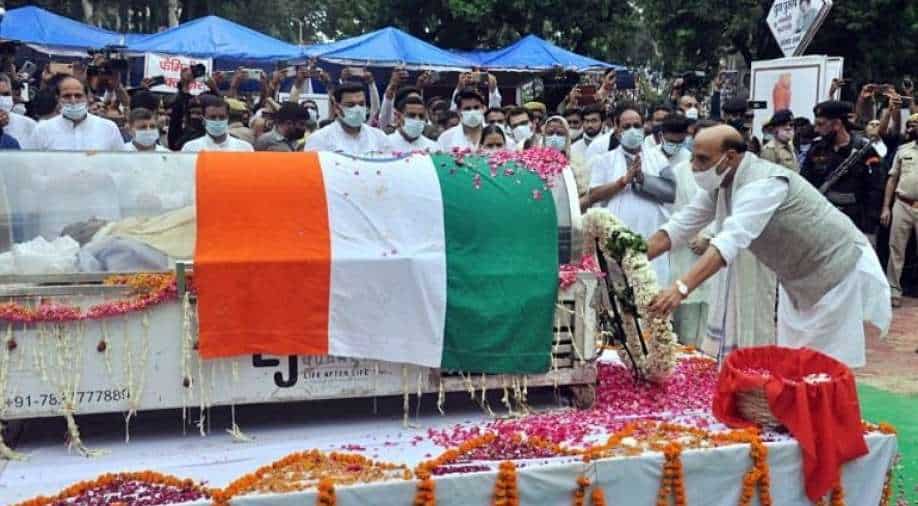 Union Ministers Amit Shah, Rajnath Singh and Smriti Irani were among those who paid tributes to the departed leader at Narora.

The two-time CM, who had also been the Rajasthan Governor, died at a Lucknow hospital on Saturday after spending weeks in the ICU.

A Hindutva icon, Kalyan Singh was the Uttar Pradesh chief minister when 'Kar Sevaks" demolished the Babri Masjid in Ayodhya on December 6, 1992.

The others present at the cremation ground were UP Deputy CM Keshav Prasad Maurya, BJP leader Uma Bharti, besides a number of state ministers, BJP workers and local people, officials said.

They said Kalyan Singh was cremated with full state honours after his mortal remains were brought here from Ahilya Bai Holkar stadium in Aligarh, where they were kept for the people to pay their last respect.

From Aligarh, the late BJP leader's body was first taken to Atrauli, near his native village Madholi, and was kept there for 'darshan'', before being taken to Narora.

A Lodhi leader, Kalyan Singh was instrumental in the rise of the BJP to power in Uttar Pradesh in the 1990s.