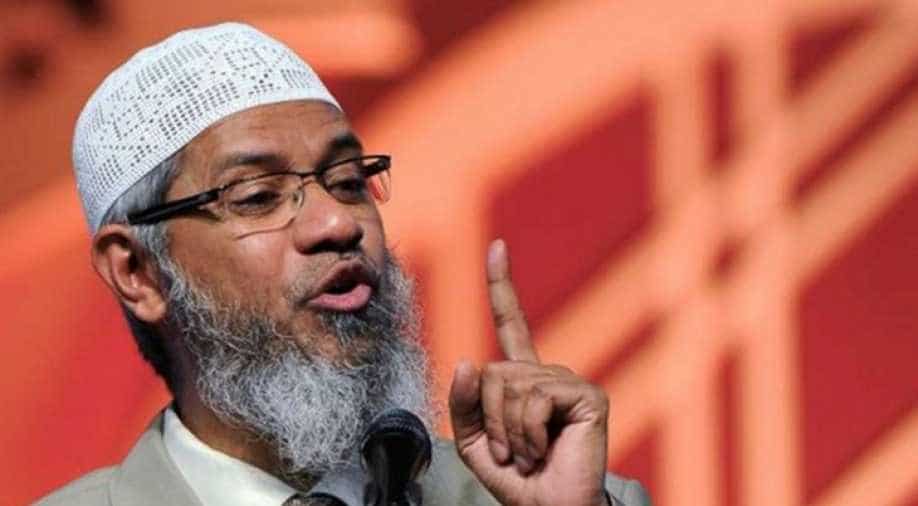 The NIA had accused Naik of radicalising youth and spreading hatred between religious groups in India through his speeches and lectures. Photograph:( ANI )

The Interpol has rejected the National Investigation Agency's (NIA) request for red corner notice against Zakir Naik stating that India's request is premature.

The agency has also told global offices to delete all data in relation to him.

Interpol claimed that the Indian authorities have failed to follow proper process of law. It also cited political and religious bias and lack of international interest as the reasons for its decision.

The NIA said its request for the red corner notice against Zakir Naik was not accepted by Interpol as the charge sheet had not been filed when the request was submitted to the Interpol headquarters.

The agency will now submit a fresh request to Interpol as charge sheet has already been filed in the concerned NIA court in Mumbai.

The NIA had accused Naik of radicalising youth and spreading hatred between religious groups in India through his speeches and lectures.

Indian youth, who fled the country to join the Islamic State (IS) have revealed that they were influenced by speeches made by him.

Naik was charged with conspiring with his organisation Islamic Research Foundation’s (IRF) Trust and the Harmony Media Private Limited to commit the offences.

His NGO was banned by the home ministry in December 2016.

According to reports, Zakir Naik is currently in Malaysia, which has given him asylum.

Now, India is likely to start the extradition process soon.

Zakir Naik's Peace TV is banned in several countries across the world including the UK and Canada.

During his interactions with the media in India, he has repeatedly denied all the charges against him.

The Mumbai-based preacher came under the lens of security agencies after some terrorists allegedly involved in the attack on a cafe in Dhaka in July last year reportedly claimed they were inspired by his speeches.