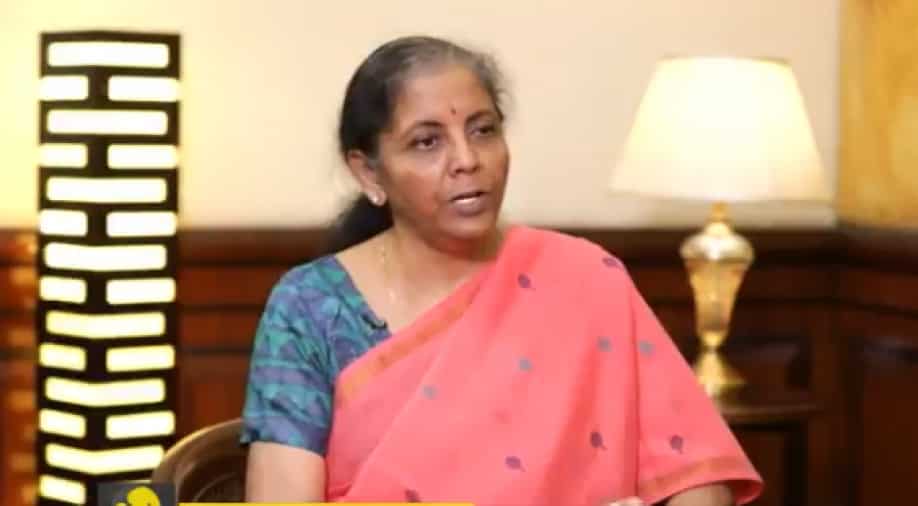 India had started to see green shoots, before the coronavirus pandemic hit in February, Union Minister of Finance Nirmala Sitharaman said even as India's economy grew at its slowest pace in at least eight years in the January-March quarter.

Asia's third-largest economy grew at a faster-than-expected 3.1 per cent in the last quarter. The Gross Domestic Product (GDP) growth stood at 5.7 per cent in the corresponding quarter of 2018-19, according to the data released by the National Statistical Office (NSO) on Friday.

To this end, Sitharaman, in an exclusive conversation with WION, said, "This is a quarter where we thought we had started seeing green shoots. That is one reason the estimates were made the way they were made. The contraction happened in April because by this time the coronavirus pandemic had hit us really fully and badly. So the 3.1 per cent -- given the fact that by February we had started having some kind of impact of the pandemic -- therefore gives me the feeling that revival was happening. But unfortunately, the God's hand... [hit us]."

India's economic growth slowed to an 11-year low of 4.2 per cent for the full fiscal 2019-20 amid a drop in consumption and investment.

India has so far reported 1,65,000 coronavirus cases, with 4,706 deaths. The government imposed a lockdown to curb the spread of coronavirus from March 25, 2020.

Economists expect the fiscal year that began in April will see the worst economic contraction in four decades, and say the economy could contract up to 5 per cent.

But Sitharaman would not like to make any estimates.

"I have said [before] I shall not make any estimates. I am watching and hearing the agencies are telling us to what extent the contraction is going to hit India. So it is my duty to be prepared for the situation. And be ready to support. With the full support of the prime minister, we want to ensure that everybody gets the full support," she said.

Watch the full interview at 9 PM IST only on @WIONews #Gravitas pic.twitter.com/1HBTM4Fwue

A Reuters poll of economists had forecast a growth rate of 2.1 per cent for the March quarter, compared with a downwardly revised 4.1 per cent rise in the October-December period in 2019.

Sitharaman also spoke about the gradual withdrawal of the coronavirus lockdown, and the importance of striking a balance of economic growth with the health and lives of the people.

India's Finance Minister @nsitharaman speaks on striking a balance between containing #COVID19 and getting the economy going.

Watch her full interview with @palkisu at 9 PM IST only on @WIONews #Gravitas pic.twitter.com/2FT3yPmFud

Also, on Friday, the Ministry of Statistics and Programme Implementation cut its growth estimate for the fiscal year that ended on March 31 to 4.2 per cent -- the lowest in at least eight years under the current series -- from a previously projected 5 per cent.

The government has maintained the lockdown ordered in late March though many restrictions were eased for manufacturing, transport and other services from May 18.

Infrastructure output, which comprises eight sectors including coal, crude oil and electricity, accounts for nearly 40 per cent of the country's industrial output.

The lockdown's full impact on manufacturing and services will become more apparent in the June quarter. Goldman Sachs has predicted a 45 per cent contraction from a year ago.