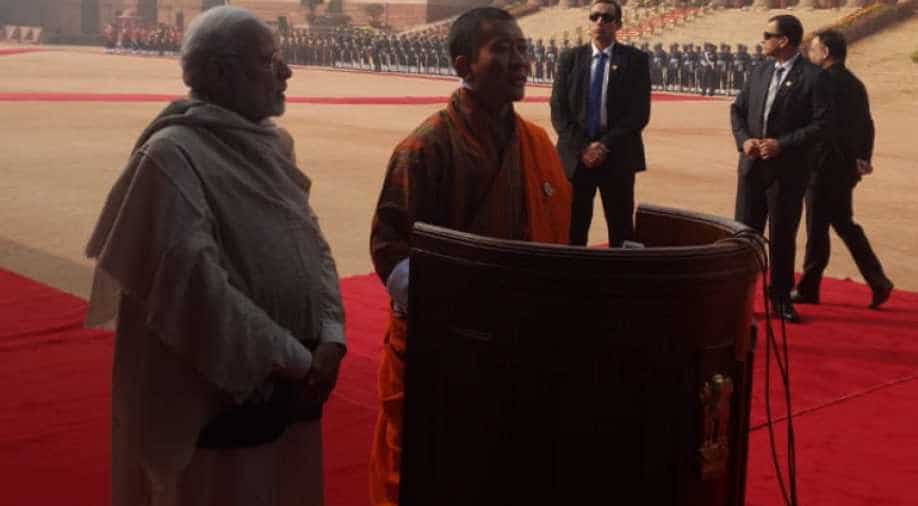 Bhutan govt will soon launch RuPay cards which PM Modi said this "will benefit the people to people ties between both the countries."

India has announced that it will provide Rs 4500 cr support to Bhutan's 12th five-year plan and both New Delhi and Thimpu have agreed on the Mangdechhu Tariff. The Mangdechhu project in Bhutan is being built with India's help and will be commissioned soon.

This was announced during joint press statements delivered by Prime Minister Narendra Modi and New Bhutanese Prime Minister Lotay Tshering who is on a 3 day maiden India visit after assuming charge in November.

Announcing India's support to Bhutan's five-year plan and outcome on Mangdechhu Tariff, PM Modi said, "In Bhutan's progress, India will be a committed friend. India will contribute Rs 4500 rupees in Bhutan's 12th 5-year plan. We discussed cooperation in Hydropower project. Work on Mangdechhu project will be completed soon. We have agreed on Mangdechhu tariff also."

Bhutan govt will soon launch RuPay cards which PM Modi said this "will benefit the people to people ties between both the countries."

Thanking India for its support to Bhutanese 5 year plans and personal commitment of PM Modi to India Bhutan ties, Bhutan PM explained how "barely 20 hours after (Bhutan Election) results were declared" he "got a call from none other than PM Modi" and "Modi was the only and first head of the govt who personally took the trouble to call and congratulate and expressed how happy he was, how democracy is taking root in Bhutan. It was that day, 24 hours after the election result was out PM wanted me to visit India."

He lauded India's neighbourhood first policy and invited PM Modi to "visit Bhutan as soon as possible" to inaugurate the Mangdechhu which will be "commissioned very soon in the next few months".

He appreciated what India achieved under PM Modi and said it is because of "Modi Factor" and his country has all the regards for it.

Earlier during the day, he was given a ceremonial guard of honour at Rashtrapati Bhawan where did he said, "I carry volumes of love from my King and people of Bhutan".

He later paid respects to the Father of the nation Mahatma Gandhi and in the visitors, book wrote "It is my great honour to be visiting India today. Thank PM Modi and people of India. I could not have hoped for a better country on my first foreign visit after assuming office"

This year marks the Golden Jubilee year of establishment of diplomatic ties between India and Bhutan and has seen a number of events. Indian Foreign Secretary Vijay Gokhale was the 1st Indian official to visit Bhutan to meet the new Prime Minister.

India is Bhutan's largest trading partner. In 2016, total bilateral trade between the two countries stood at Rs. 8,723 crore. 82 % of Bhutan's total import which is Rs. 5528.5 crore comes from India while Bhutan's 90% export goes to India and stands at Rs. 3205.2 crore. Most of the Bhutanese export to India is electricity.