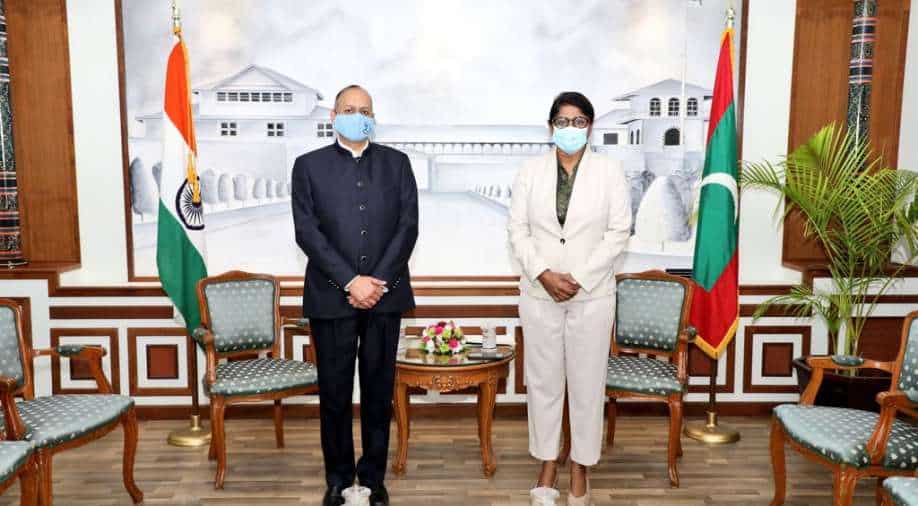 During the meeting, the Maldives defence minister expressed her deep appreciation for the Coast Guard Dockyard project which is touted as the most comprehensive defence infrastructure development project in the country.

India's defence secretary Dr Ajay Kumar was on a two-day visit to the Maldives during which he held discussion with the top leadership of the Maldives National Defence Force (MNDF) as part of the third Defence Cooperation Dialogue(DCD) and called on Maldives Defence Minister Mariya Didi.

The first DCD was held in July 2016 and the third DCD was held in January 2019. A tweet statement by the Indian mission in Male on the dialogue said, "both sides discussed joint efforts and capacity-building measures to counter trans-national crimes and enhance security in the region."

During the meeting, the Maldives defence minister expressed her deep appreciation for the Coast Guard Dockyard project which is touted as the most comprehensive defence infrastructure development project in the country.

During the 2021 visit of EAM Jaishankar a pact was signed for the development of the Coast Guard Harbour at Sifvaru - Uthuru Thilafalhu(UTF).

Work on the project will be completed in two phases and is expected to be completed in three years. A Maldives government statement on the meet said that Minister Didi "India for the immense assistance" during the COVID-19 pandemic with vaccine shipments, medical supplies, transportation of food supplies, humanitarian assistance and "technical support for MNDF, with more than 170 medical evacuations and 130 surveillance missions conducted in the past couple of years."

During the meeting with MoS Khaleel, the minister "highlighted the continuous contribution by the government of India towards enhancing the capacity and readiness of the Maldives National Defence Force", said a Maldives govt statement.

Both sides agreed to further strengthen strategic cooperation "particularly to ensure peace and security in the Indian Ocean region", the release further explained.

The Maldives has a huge exclusive economic zone in the Indian Ocean, a region that is the centre of global trade. But worries remain especially with piracy, illegal and unregulated fishing and other such worries.

Meanwhile, during the Maldives visit, the defence secretary handed over the refitted CGS Huravee (ship) to the Maldivian side and inaugurated the phase -I extension of the Composite Training Centre (CTC) of the MNDF.

CGS Huravee was gifted by India to the MNDF in 2006 while Phase-I extension of CTC was completed through an Indian grant.

The CTC itself was inaugurated during the state visit of PM Modi in June 2019. Additionally, he handed over 2.8 tons of medical equipment for use by the Senahiya Hospital run by the MNDF in Male.